Getty Images
By Britni Danielle · Updated December 6, 2020
Samira Wiley made a name for herself playing strong, witty, and forthright characters who aren’t afraid to tell you exactly what’s on their mind. From Poussey Washington on Netflix’s hit series, Orange Is the New Black, to her Emmy-winning role as Moira on Hulu’s gripping drama, The Handmaid’s Tale, Wiley has a knack for portraying powerful characters who risk it all for what’s right that just feels like it comes to her naturally.
Loading the player...
But according to the Washington, D.C. native, finding her own voice took time. “It’s been a journey, it really has,” Wiley told ESSENCE. “It feels like you have this huge platform and it’s like, well, sh-t, I don’t want to f-ck it up.” The actor credited her role on The Handmaid’s Tale, which chronicles the demise of the United States by a fanatical religious government that forces women to bear children against their will, with helping her to figure out the issues for which she wants to advocate. Spoiler alert: she’s all about empowering other women. “It’s so interesting how fiction can teach you about your own reality. It’s so clear to me in that show how they pit women against each other,” Wiley said. “These men [on The Handmaid’s Tale] have given women a false sense of superiority over each other and have put a divide between these women so they don’t even understand the power they have by supporting one another.” 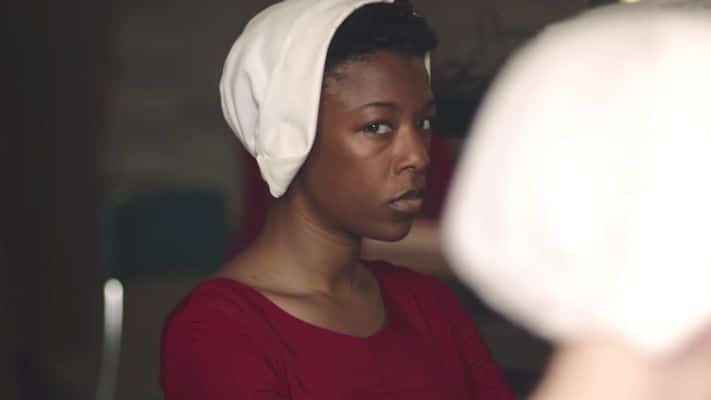 Wiley added, “I’m so in touch with wanting to cultivate sisterhood and knowing that me helping you, and you succeeding, is also me succeeding.” Wiley admitted that she wasn’t fully ready to step into the power of her platform and voice a year ago, but now she doesn’t “have reluctance about it. It gives me joy. I feel like it’s my responsibility and one that I take it seriously.” Recently, Wiley lent her voice to Secret Deodorant’s “I’d Rather Get Paid” campaign, which aims to tackle the pay disparity between men and women, as well as Aerie’s latest push to be more inclusive of women with all types of bodies. Previously, Wiley — who’ll celebrate her second wedding anniversary with her wife, writer Lauren Morelli, this month — also spoke out about LGBTQ issues. While Wiley never asked to be a role model, she’s very aware that people look to her for inspiration. “I have a voice. People are looking at you, and you have to choose what you’re going to use that for. It’s kind of not an option to not use it,” she said. “I’m just super clear about what I want to do with my voice, and because I have more courage and conviction around it.”

I’ve teamed up with @SecretDeodorant to share an important message: #IdRatherGetPaid. That’s right – women deserve equal pay to men, and we’re making it known. Check out my Stories for an awesome video from #Secret, featuring yours truly plus some of my fellow fair pay advocates, like @sophiabush and @cattsadler. #Ad

“The activism projects I’ve been involved with concern me and many of the women I know in my family and workplace,” Wiley added. “However, I also care about equal pay and body positivity for the sake of future generations of women. I want them to be able to live in a nation that supports them, their lifestyle, and anything I can do now to help raise awareness of the gender wage gap, and body positivity can help pave the way towards a more positive future for all women.” Although Wiley is currently busy with several projects — including guest starring on Will & Grace and preparing for the release of Vault, a film about a 1970s bank heist — the next big role she’s preparing for is motherhood. The 31-year-old told ESSENCE she “really want[s] to be a mom.”

Wiley points to her mother as an example of how she’d balance family and work. “There’s been this age-old thing in our country — less so, now — that you could have a career or be a mom. And I’ve never ever thought that because she was both,” she explained of her mother, Christine, who is now a pastor in D.C. Just like her parents faithfully served their community, Wiley hopes to also do the same with her work. “With my art, with my activism, I just want to spread a message of love and acceptance,” she explained. “Because that other stuff is so toxic. I just want people to have more open hearts.”