Skip to content
Disable DS:
is_singular( 'article' ): 1
Article video enabled.
jwplayer : 4447
has_no_video_inline:
has_video_meta:
Article has inline video, so at the end.
By Keyaira Boone · November 12, 2018December 6, 2020
Black female talk show hosts were once confined to slender, well-enunciated palatable women, chosen by executives who wanted to reach the broadest of audiences. Everyone had the same safe opinions; the same clipped tone of voice. They wore the same jewel-toned pantsuits, and for a while, they even seemed to have the same awkward off-center part in their hair. Because their appearance, speech patterns, and public personas were chiseled down to be as digestible as possible to a white audience, few Black women were entrusted to represent what America wanted to see from us.
Loading the player...
But that was before cable networks and digital platforms allowed a diversity of modern creatives, who are now emboldened to develop their own audiences. Ever-evolving technology has birthed a new class of hosts — women who are excelling in spaces created to display their blackness as opposed to taming it. And that class is about get a little bigger. Meet Nina Parker 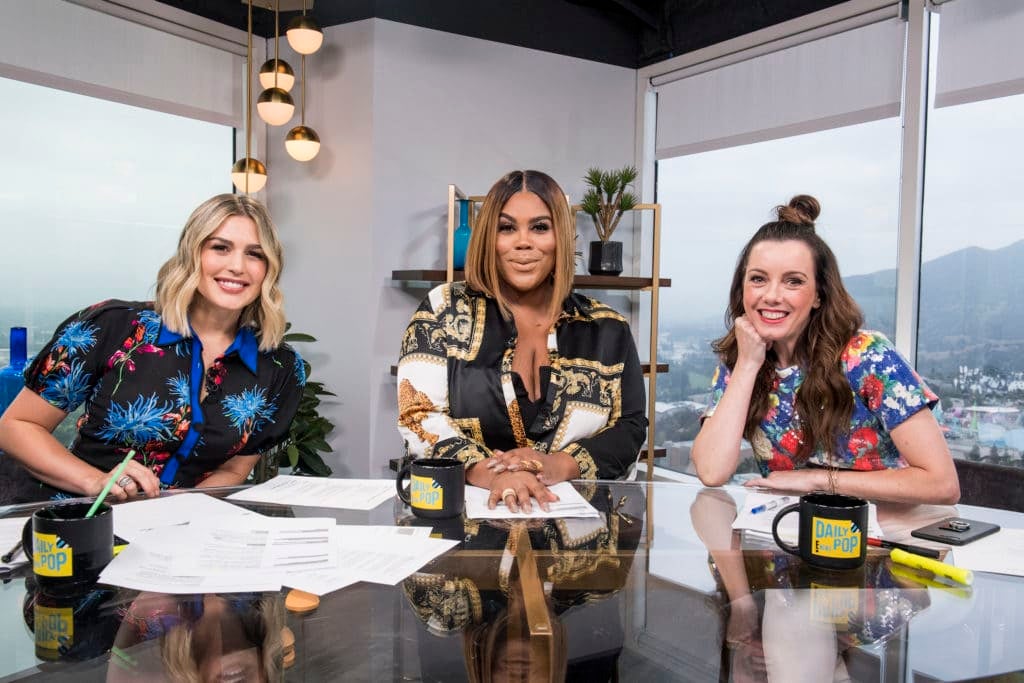 Nina Parker, the journalist we met trying to tame the most outspoken reality stars on the Love & Hip Hop reunion couch, has a new show called Nightly Pop! She also has a new professional mandate: To develop content where Black women can have an unfiltered voice that’s supported and not drowned out by their counterparts. “I want to be able to be unapologetically Black. I want to be able to be unapologetically a woman and have everything that I’m doing be heard without a footnote,” she told ESSENCE last month. “We feel like we have to assimilate to a certain type of personality to get acceptance and I think it’s over for that,” Parker, who began her career in 1999 as an intern for a local NBC station in San Francisco, concluded. On Nightly Pop!, Parker is joined by co-host Morgan Stewart and Hunter March where the three enthusiastically discuss the latest in pop culture. The Sacramento, California native, who lists Oprah Winfrey as her media idol, is not only breaking barriers when it comes to women of color representing on the small screen. She’s also proud to be a plus-sized host. Parker said it’s one of the reasons why she loves working at E!, a network she describes as a workplace “where who I am is enough.” “I feel like by putting me in the position where I can work next to someone that’s a size zero and still feel confident, I feel like that’s changing the game,” she said. The former TMZ  TV personality hopes the network’s willingness to align themselves with someone who represents the average woman will inspire others to do the same. “I always say to my makeup artist, ‘Please don’t contour me too crazy,’ because I want people to know that I look like this when I walk away from the camera. And I feel the same way about personality,” Parker explained. “Like I don’t want it be too filtered, I think that’s important.” Parker plans to take an unfiltered approach to Nightly Pop!, and is unafraid to voice her point of view passionately. Even if it’s at the risk of being called angry, a trope Black women are often labeled with to discredit and undermine them. Parker said she’s been called angry at times too. “Our passion is always viewed as something else or our quietness is always viewed as something else. We feel like we cant win,” Parker continued. “I’m starting to feel like that’s other people’s problem, you know?” Meet Africa Miranda 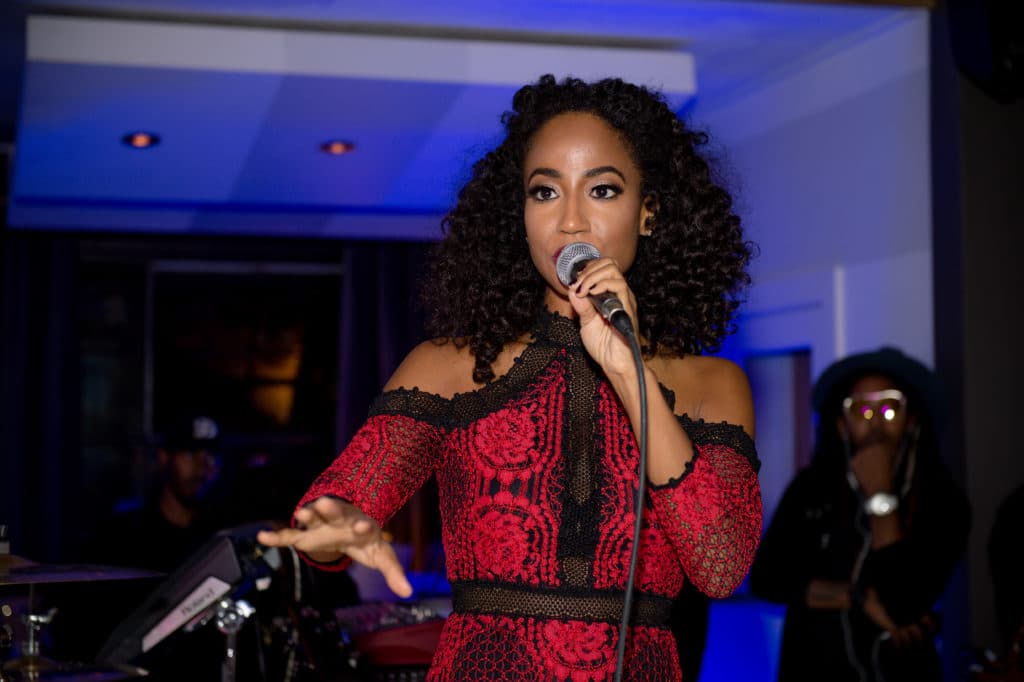 When Facebook announced that they’d be dipping their toe into the content game, we were thrilled that they included Black voices and shows into the mix. But Facebook has more than just Jada Pinkett Smith’s phenomenal Red Table Talk series. In a partnership with Facebook Watch, Africa Miranda created her eponymous show that’s the embodiment of her personal motto: “Step Up, Step Out, and SHINE!” The lifestyle show features candid conversations with people she’s genuinely interested in like Michael Arceneaux, Jovian Zayne and Jamé Jackson. The Montgomery, Alabama native uses her country twang to express her feelings on religion, race, and LGBTQ issues proudly. She told ESSENCE that she built the show around “conversations that I want to have with people that I think are amazing and special, and that I think the world should see more of.”

The Africa Miranda Show - S1:E4 - Step Up, Step Out, and SHINE with Jovian Zayne

Today is a very special day!My first book "Step Up, Step Out, and Shine" is officially here! I welcome author, speaker and the ultimate motivator Jovian Zayne for a powerful conversation about finding your purpose. Please like/share/comment and join @the The Africa Miranda Show Group to keep the conversation going!Get your copy of my new book here: bit.ly/africashinebookI will also be headed out on a 6 city book tour starting October 8th. I would love to see all of you!NYC - OCT 8TH - RSVP: bit.ly/shinetournycATL - OCT 11TH - RSVP: bit.ly/sihnetouratlCHI - OCT 17TH - RSVP: bit.ly/shinetourchiSAVE THE DATE:DC - OCT 26THHOU - 11/1LA - TBA

“I think it’s time for new voices and I’m very thankful that I’m getting to be one of those voices,” added Miranda. “I can sit and say that The Africa Miranda Show is 110% authentically me.” That authenticity made her one of the most followed people on the live streaming platform, Periscope. She brought that considerable audience with her to Facebook Watch, where the conversations continue. Miranda welcomes mostly women to come into the space and curate conversations they think should be amplified. The former reality TV star said it’s important to her to showcase a variety of voices and opinions. “All Black women are not the same. All Black girl magic is not the same, and it’s time for us to be able to show this magic in all of its forms,” she concluded. Meet Sylvia Obell

Is there anyone better to announce MY NEW INSECURE AFTER SHOW with than @issarae?! “Hella Opinions” will stream on @buzzfeednews’ Twitter, Facebook, YouTube, etc. Monday’s at 9pm! Very excited to talk all things #InsecureHBO with my frienddddssss every week! Get ready for a lot of your faves to pop up! We finna act up! . . . . #insecure #insecurehbo #hellaopinions #am2dm #issarae #aftershow #insecureaftershow #tv #tvrecap #blackgirlmagic

Sylvia Obell is Buzzfeed News’ secret weapon. After her opinion-laced exposé on Blac Chyna went viral in 2016, she became a writer to watch. Now, she’s taking her talents to the digital screen with her series, Hella Opinions, which airs Wednesdays at 9PM ET right on the Buzzfeed News Twitter page. Originally conceived as an after show for HBO’s hit series, Insecure, in season two it’ll become, according to Obell, “just a full Black culture nightly show.” Like Parker and Miranda, she and her team — which features a crew made up entirely of Black women — are creating inside a traditionally white institution. But they are doing so with an unprecedented level of creative control. “This is definitely the most freedom I’ve ever had in my career without a doubt,” Obell told ESSENCE. “That just takes off so much pressure it just allows you to really get creative and figure out something that feels authentic. They’re just letting us do our thing.” When the ESSENCE magazine alum sat down with her editor and producer Kovie Biakolo to discuss the show’s possibilities, their vision was clear from the start.

Today on @am2dm I sit down with @gabunion to talk about her new movie #breakingin, women saving their gotdamn selves in 2018, and diversity in Hollywood. We also admire each other’s skin because #melanin #blessed #blackgirlmagic.

“When we went into this, we were like ‘This is definitely a very “for us, by us” kind of culture show.’ We felt like the only way it could be authentic, and just feel like us, and not feel forced and contrived, is if it really was just made by us,” she explained. Not having to translate Black culture references or explain guest’s backgrounds gives Obell time to do something many Black women rarely get to do at work — have fun! Obell is part of the team that creates fun segments, including games. She also taps up-and-coming cultural commentators, such as Gia Peppers, Scottie Beam and Mouse Jones, opening up their talents to wider audiences. Obell takes pride in offering comic relief to her fellow Black millennial women, who are overrun with negative realities and sometimes just need a place where they can escape for 30 minutes. “Black women deserve as many examples and reflections of ourselves as we can have,” she said. That’s something we’ll always be down to tune in to.

Successful Black Women From Across The Diaspora Share Their ...

Best Durable Shoes For Kids Who Love The Outdoors