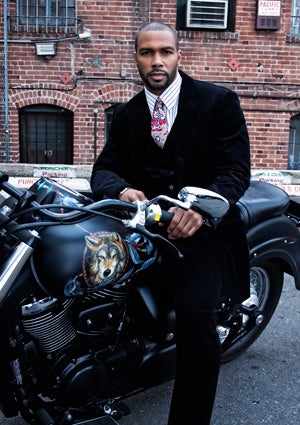 Thank God for summer and its season of gritty cable television shows like TNT’s “Dark Blue.” Not only does the cop drama have action, it also boasts romance and eye-candy — courtesy of Georgia’s own Omari Hardwick. Last year we spoke to Omari about the tough life as a struggling actor and losing his infant son, now he’s beginning a new season of “Dark Blue” as character Ty Curtis. He chatted with ESSENCE.com about the role’s changes and healing through God’s grace. ESSENCE.com: You’re calling us from California, but you’re a Georgia native who’s moving to Brooklyn soon, correct? OMARI HARDWICK: I’m from Savannah, but L.A. has been home for eleven years. Now, I’m looking to buy something in Brooklyn this September. I have family in New York, they live in Brooklyn’s Flatbush area and in Fort Greene. ESSENCE.com: How did you begin your acting career? HARDWICK: I come from the stage so I started in New York, lived there for eleven years. I did “Fences” off-broadway at the Beacon Theater so it’s amazing that Denzel Washington and Viola Davis brought it to Broadway. I worked on the workshop of “Topdog/Underdog” before it went to Broadway, my minor in school was theater, so I’m based in that and then I moved to Los Angeles. ESSENCE.com: How does the second season of “Dark Blue” differ from the first? HARDWICK: It’s lighter this season, but for the fans who liked the edge and the show’s likeness to an action movie, it still has that. When we looked back at last season, the major difference is the introduction of this cast of individuals because it was more about them staying to themselves last year. This year is a complete turn because you’ll see a lot more locker room camaderie and many episodes will conclude at a bar with us having a drink together. ESSENCE.com: How’s your character Ty Curtis different this season? HARDWICK: Last year he was trying to juggle the family with work life and his mantra was: be unfaithful to both by cheating on the job with the wife and cheating on the wife with the job. No other character has to balance the two like Ty, and now his wife wants kids and it’s about how they can maintain the mortgage while he obviously enjoys what he does. But he’s a cop because of passion, not the money that he makes. So this year Ty’s a lot more exciting and without giving too much away, he won’t have to juggle as much of the family life. ESSENCE.com: With the onslaught of reality television and the rising popularity of channels like AMC and TNT, are cable channels becoming the new HBO? HARDWICK: You’re right on. If reality shows are so popular, that means their viewers are screaming for more realness. The big four major stations aren’t adhering to that desire to get to the guts and glory that you usually find in movies and the cable channels pick up where movies have left off. The way the recession has affected Hollywood, a lot of actors that had robust opportunities before in film no longer have such plum options, so cable has done a good job of becoming a happy medium for artists deemed film actors. ESSENCE.com: Tell us a bit about your upcoming film, “I Will Follow.” HARDWICK: That was a really great project and it was done by Ava Duvernay, a big time publicist in Los Angeles behind films like “Invictus.” She’s very talented. She asked me to do the project, which includes Salli Richardson and Blair Underwood. Hopefully, the film will knock on some film festival doors. It’s a really good heartfelt story about love, loss and death with Salli being the lead, and Blair as one of Salli’s love interests and me as the other. ESSENCE.com: Last time we spoke, you were dealing with the loss of your young son. How are you maintaining? HARDWICK: Just God. I’m not shutting myself off from kids, I’m remaining open to kids and the energy that they bring. I definitely get stared at by a lot of little boys but God’s been incredibly… God, if you know what I mean.