Nash plays nurse Didi Ortley in the half-hour comedy about a group of women caring for the elderly. Here, she shares why she calls this this a “delicious” character and why roles like this don’t come everyday.

ESSENCE.com: You’ve called this a delicious role. What about it is delicious?
Niecy Nash: Because it’s so far from anything that I’ve had to play in such a long time. It’s exciting when you’re still discovering things about not only the character but yourself as a performer. That’s what makes the words taste good in your mouth. It’s like ‘How am I going to say that? How am I going to interpret that? How does this character feel about that?’ That’s the thing that makes it exciting.

ESSENCE.com: Is there a part of you that feels like you’ve been typecast?
Nash: I don’t think it’s just me. I think there are a lot of similarities in the roles that come out for Black women. In my career, I’ve been the sassy Black everything, from the sassy Black momma, the sassy Black neighbor, to the sassy Black friend. Roles like this one on Getting On don’t come along every day, where not only are you scrubbed down in the way you look, but the texture and tone rest in a very real place. We just don’t get scripts like that every day.

ESSENCE.com: Everyone on the show has no makeup on. It seems very practical.
Nash: You say practical, I say brave, because we are giving you old hags on this one right here. We move around in a world where makeup is so much a part of our lives. Between photo shoots and red carpets and meetings and lunches, you always have to be dolled up; you always have to have your tracks in; you always have to have good eye lashes and glue in your purse because you never know. Because I was filming Monday through Friday, on Saturday I would miss looking glamorous so much I would do a little bit too much. I was missing was the short skirt and the clear heels, my husband was like ‘Where are you going with all that stuff on your face?!’ and I’m just like ‘I don’t know!’ 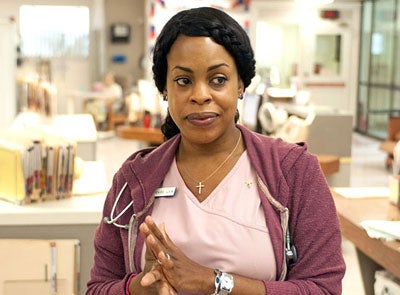 ESSENCE.com: Were you able to sneak in some concealer or something?
Nash: It was like barely anything. Maybe just like a tinted moisturizer.

ESSENCE.com: Extended care for the elderly is not necessarily a part of life that you would imagine you could find comedy in.
Nash: I also think that that’s real life though. I think that when you live in a place where death and dying is a part of your daily experience, you find places for humor. When HBO put us in boot camp, we had to follow real nurses around on their shifts and serve the elderly. I was at one hospital and when I tell you that break room was like a party. I was following them around and this person is taking their last breath and this one’s family crying and falling out. But when they walk in that break room it was like a club. I was like ‘What is going on?’ We were eating Filipino food and had the radio up all loud! But I think you have to find the levity in it because it’s so heavy.

Catch Niecy Nash on HBO’s Getting On, Sundays at 10pm ET