By clicking Sign Up, you agree to our Terms of Use and that you have read our Privacy Policy
Skip to content
Photo by Scott Olson/Getty Images
By Sydney Scott · Updated December 6, 2020
Michelle Obama’s new memoir, Becoming, is flying off shelves. The Guardian reports that the book has topped U.S. charts and is selling nine copies per second. Her publisher Penguin Random House has ordered an additional 800,000 copies of the book following its first print run of 1.8 million copies. The company reports that Becoming sold 725,000 copies in its first 24 hours. Liz Harwell, director of merchandising at Barnes and Noble, told the publication that the book “is among the fastest sellers in Barnes & Noble history.” Madeline McIntosh, CEO of Penguin Random House, has called the response to Obama’s memoir “extraordinary.” 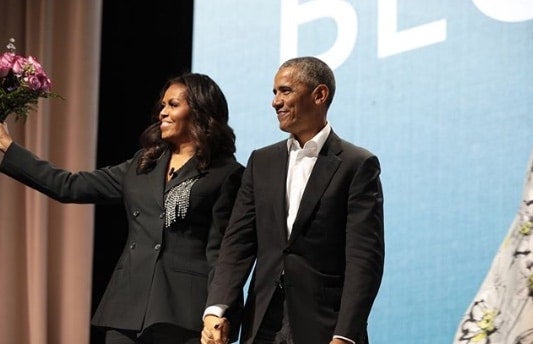 Obama’s autobiographical memoir details not only her time in the White House with her husband, former president Barack Obama, but also details her upbringing in Chicago, her public campaigns and her role as a mother to her two girls, Sasha and Malia. Becoming is deeply personal as Obama not only opened up about marriage counseling, but also her infertility struggles which led her to conceive via in vitro fertilization. Currently, Obama is on an arena tour to promote her book. (Move over Jay and Bey!) After being surprised by our forever President Obama at her last stop in Washington, D.C., Mrs. Obama will be headed to Boston’s TD Garden on Sunday.