For any and all who somehow don’t know: Get Out is the comedic horror movie remix of 1967’s classic Guess Who’s Coming to Dinner. Both the hilariously scary directorial debut of Jordan Peele and the late Stanley Kramer’s comedy-drama follow an interracial couple—Black man, White woman—on a trip to meet the woman’s family, who don’t know their daughter’s lover is African-American.

Celebrating its 50th anniversary this December, Guess Who’s Coming to Dinner stars Sidney Poitier in one of his most revered roles, confronting racial conundrums while presenting blackness to mainstream (read: “White”) audiences with characteristic charm and dignity.

The recent documentary I Am Not Your Negro reminds us all of the brilliance of James Baldwin, who once famously remarked that “there is, in fact, no White community.” His point being that—though there are, for example, certainly Italian, French and Jewish communities—whiteness was set up as an artificial construct in America to justify Black oppression. In reminiscing over Guess Who’s Coming to Dinner then, it should be noted that Joanna Drayton (Poitier’s fiancée, portrayed by actress Katherine Houghton) was not strictly white, insofar as, per Baldwin, there are no white people. Her background is never specified in the film, though the actress herself is of English, Scottish and Welsh descent. 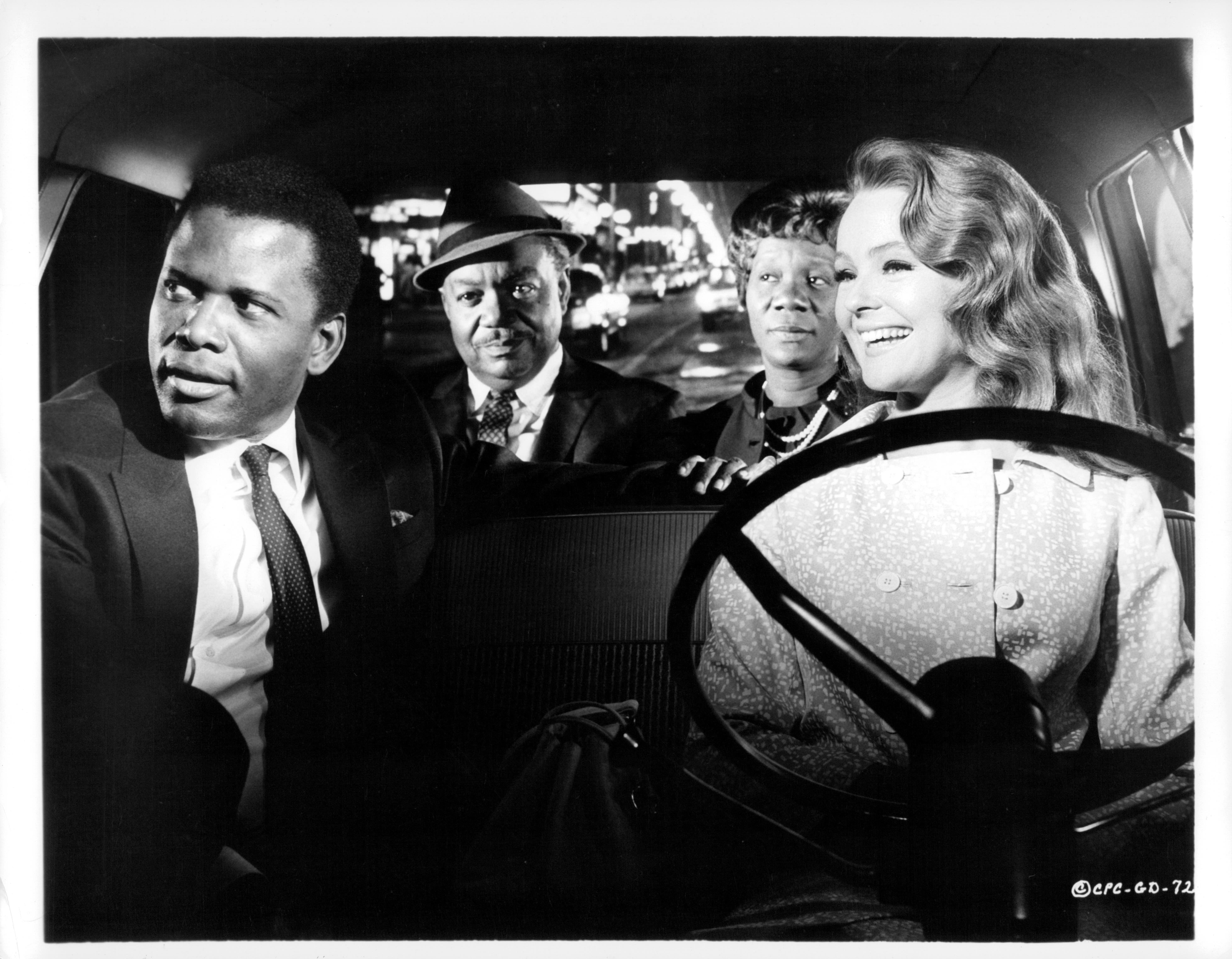 That said, Guess Who’s Coming to Dinner was a milestone for portraying the first Hollywood kiss between a Black man and a White woman onscreen, as well as presenting the entire debate over interracial romance skillfully and dramatically enough to score two Academy Awards: Best Writing, and Best Actress for the legendary Katherine Hepburn. In a modern age when Barack Obama won the presidency of the country, twice, as the product of an interracial romance (and arguably, partially because of it), the taboo reality of such unions is perhaps hard to imagine. But three years after the passing of the Civil Rights Act, one year before the assassination of Martin Luther King Jr., anti-miscegenation laws still stood in the southern United States and elsewhere. Guess Who’s Coming to Dinner catapulted Sidney Poitier to the top moneymaking actor of ’67 as part of a trilogy of starring roles in films dealing with race relations. (See both In the Heat of the Night and To Sir, with Love, stat.)

Just this year, actress Ruth Negga received an Oscar nomination for playing Mildred Loving in Loving, about the Supreme Court case that banned anti-miscegenation laws in the U.S. the same year Guess Who’s Coming to Dinner became a box-office hit. Last month saw the release of the biographical romance A United Kingdom, based on the true story of Botswana president Seretse Khama and his English wife, Ruth Williams, and a marriage that rocked relations between the African nation and the British empire.

Though hardly the shocker it once was, clearly interracial relationships still dominate the imagination. And where the silver screen is concerned, Guess Who’s Coming to Dinner was the granddaddy of them all. For any and all strangers to the film or the mastery of Sidney Poitier, Guess Who’s Coming to Dinner was recently released on Blu-ray in a special 50th anniversary edition.