Let the record show that Kanye West knows how to throw a party. His Madison Square Garden fashion show was also a massive album release event full of random, fun moments: Kanye giving a speech, people chanting their disdain for Nike and ‘Ye passing the aux cord to anyone interested in playing a new song. Yeezy Season 3 was absolutely insane. Check out five key moments from the evening:

1. Frank Ocean came out of hiding. We’re not sure where he was or what he’s been up to, but there he was in the audience. No word yet if he’s dropping new music anytime soon—please, Frank!—but he does appear on The Life Of Pablo’s “Wolves.”

2. Kanye reignited his beef with Taylor Swift and fired shots at Ray J. On the TLOP track “Highlights,” Kanye raps: “I bet me and Ray J would be friends/ If we ain’t love the same b***h/ Yeah, he might have hit it first/ Only problem is I’m rich!”Ouch. 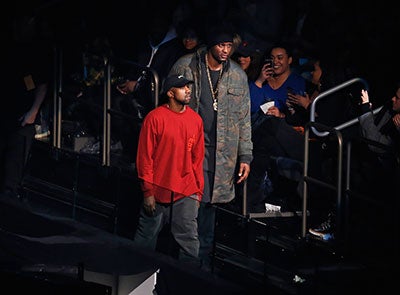 4. Lamar Odom made his first public appearance since being hospitalized. The basketball player looked healthy and happy while he enjoyed the party. We’re glad you’re doing well, Lamar!

5. And in a weird turn of events, Kanye announced plans to release a video game dedicated to his late mother called “Only One.” In the trailer for the game Donda West ascends to heaven, rides a white horse through the clouds, and floats above us with angel wings.

Yeah, Yeezy Season 3 is surely a conversation starter. Relive the concert over at Tidal.