The multi-talented Smollett family is adding yet another accolade to their growing list of accomplishments with the release of a new family cookbook.

Appropriately titled, The Family Table Cookbook, the finished product is a collaborative effort on behalf of the 6 Smollett siblings—Jake, Jazz, Jussie, Jurnee, Jocqui and Jojo—that features a collection of childhood memories and the delicious meals that went along with each one.

We caught up with big sister, Jazz Smollett, just after the family brought a taste of the book to the 2018 ESSENCE Festival and she gave us the inside scoop on how the cookbook came to life.

Before each of the siblings made their marks in Hollywood, they spent years road-tripping around the country with their parents. While moving between states thirteen times certainly didn’t come without a plethora of endless memories, the siblings grew most fond of the time they would spend around a wooden dinner table hand-crafted by their mother, Janet, and the meals that would accompany each gathering.

Jazz says their mother building their dinner table from scratch was a big part of why they decided to let the world in on this cherished aspect of their childhood.

AAYYEE! 🕺🏾Sooooo excited to share the cover of our new cookbook coming out this spring! THE FAMILY TABLE is 125 of our family recipes. Pre order link in bio. Go grab yourself a copy! #TheFamilyTableCookbook fun fact: our mama (Janet Smollett) handmade the Beautiful cover table. Yup. Superwoman.

“The main part of the experince that made us want to share it with the world was the fact that our mom built the table herself. Like, literally built it with her own hands,” Jazz told ESSENCE. “She went to the lumber yard, got the wood and then in those early days, our dad was helping her build it but, it was all her creation and her brainchild. They didn’t have much money at all when they started out so, they built all of their furniture, actually. She built beds and our cribs and couches and toy boxes. We even had a slide in the middle of our bedroom that she built out of wood and sanded down! 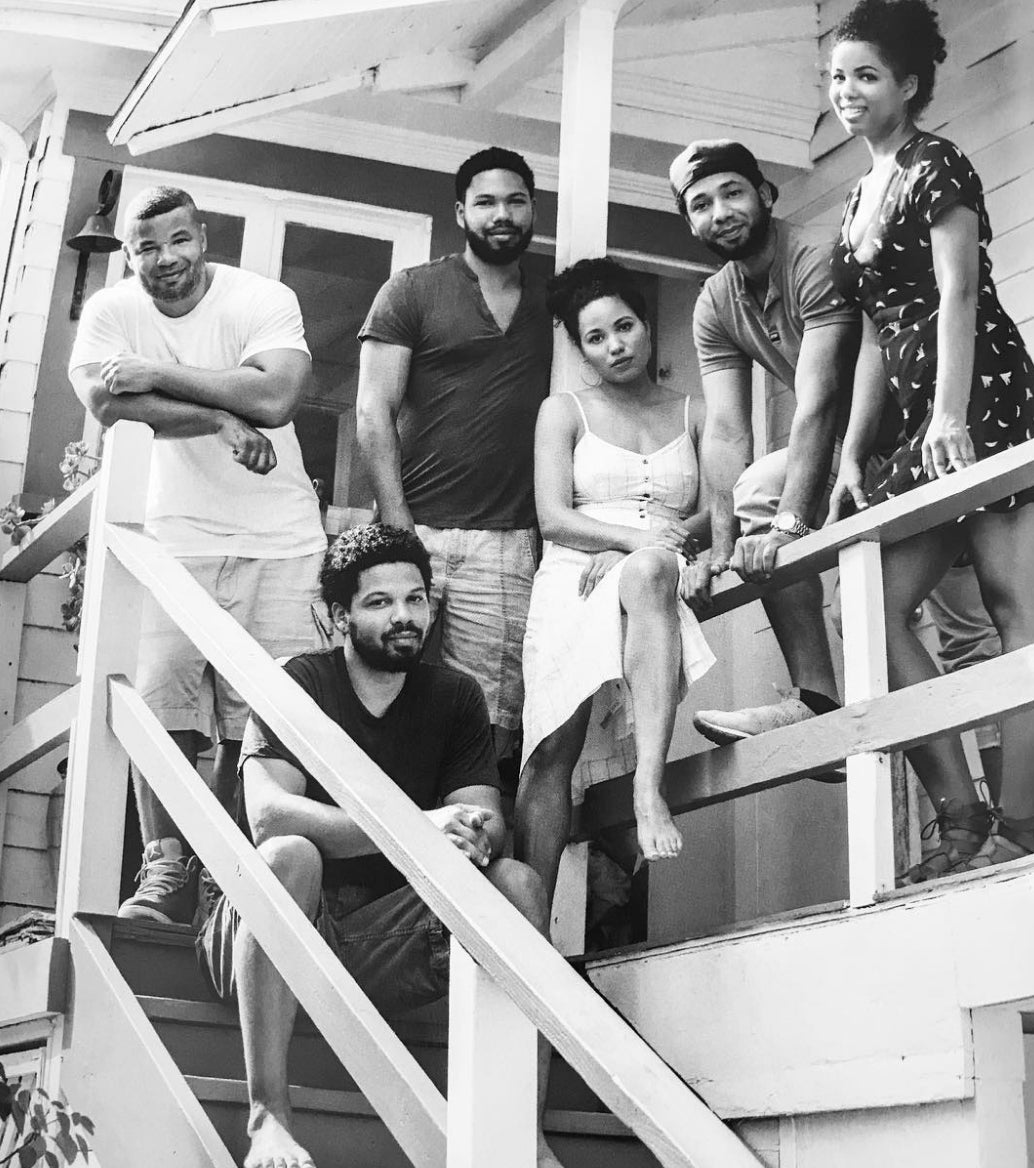 Another significant detail that proves to be a connecting thread throughout the cookbook is their mother’s New Orleans roots. The “eclectic” nature of the recipes in the book(as described by Jazz) is a true nod to the influence of the incredible culture that blankets the Big Easy.

“[Our mother] is actually from New Orleans so, a lot of the magic that is New Orleans is a part of the book. I feel like I can best explain who our mom really is to people who are from there or have been there. She’s very cultural and the culture and the color that’s present in that city is all tied into the table and into her recipes as well.

We actually have a chapter in the book called New Orleans Roots because we grew up eating gumbo at every birthday and eating oyster po’ boys.”

While the Smollet siblings are definitely a fun bunch, they take their inherited culinary skillset very seriously. So naturally, when asked which of her brothers or sister are the best cook, Jazz didn’t quite have an answer.

“I’m not allowed to answer that because it’s a controversial question,” she says jokingly. “Only because we have a tier system and there’s like, a ranking. Jake approached me a while ago with this tier system and I agreed to it. He was like, ‘You and I are on tier one and then, we also need to get Jurnee and Jussie.’ And then they ended up on tier 1 also.  JoJo and Jacqui….just a month ago, Jojo was moved up to tier two. Very serious stuff [laughs]!”

As it turns out, not unlike most families, each of the siblings has specific a dish that the entire family loves.

“Jake can cook absolutely anything,” Jazz says. “He doesn’t really like to bake but, he’s like, king of the grill. I love to bake but, I love to eat savory. So, I can bake really well and I’m the bean queen. Red beans and ham hocks, black beans and coconut rice, lentils, legumes….I love beans. People think it’s a simple dish but, you can do a lot with beans. Jurnee’s really good with using different spices and she loves making a lot of different side dishes. She’ll whip up the best mashed potatoes and throw some cheese in there and then her cornbread has gotta have bacon and cheese and jalapenos. She throws everything together really well.” 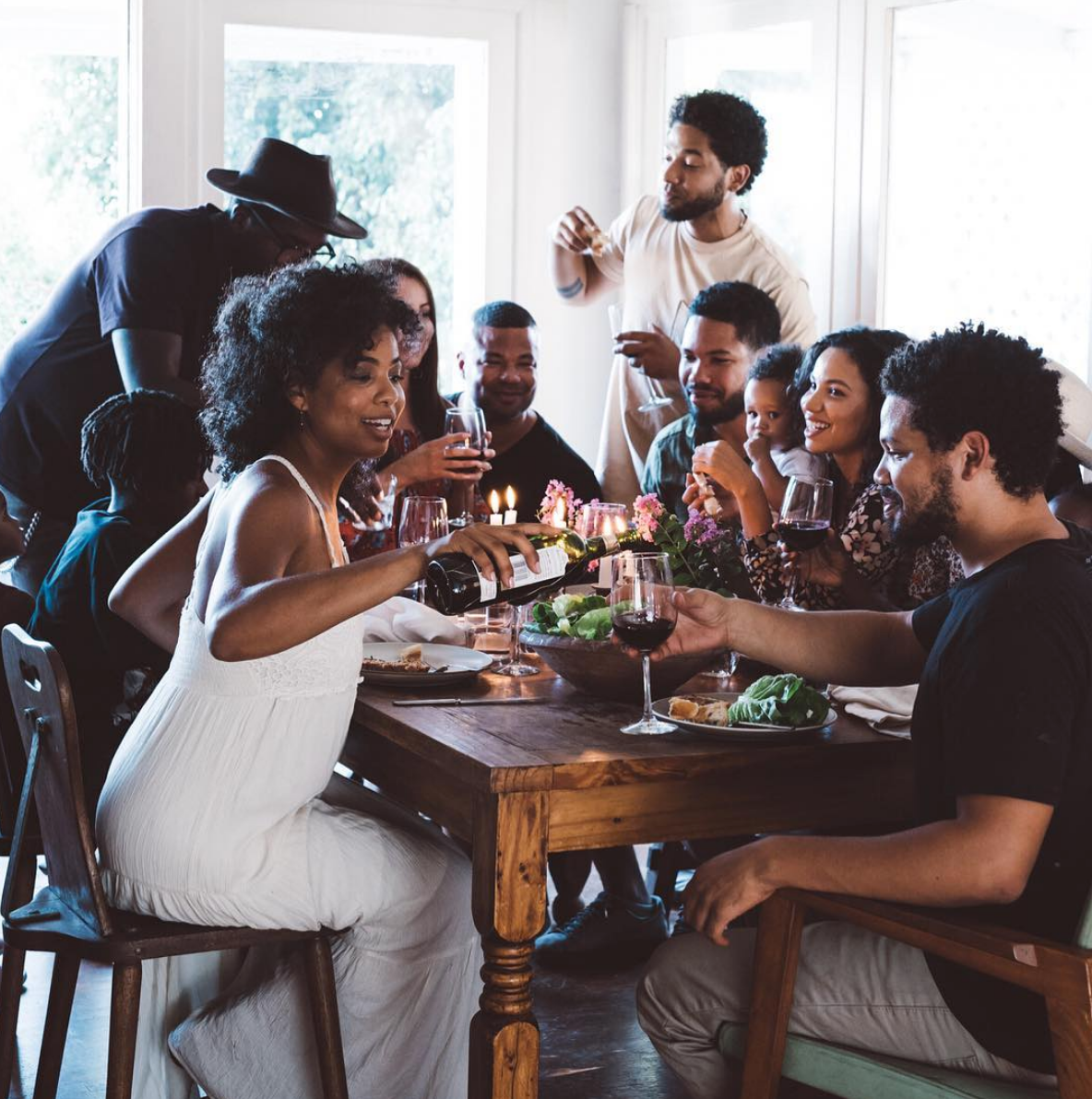 So where is the famous Smollet family table today?

“The newest table [my mom] built is the one on the cover of the book,” Jazz shares. “And then my sister Jurnee’s table that she has at her house was actually built by our mother too.”

Reflecting on one of her favorite memories from the family table, Jazz says finding out that a new sibling was on the way was a common occurrence when the Smollets sat down for dinner.

“One of the most unforgettable memories, aside from food, would have to be often being told that there was a new baby coming,” she said. “I’m the second of the six siblings so, I remember most of those [announcements]. I don’t remember when they said Jussie was coming because they probably didn’t tell me until much later because I was too young to be told too early, but from Jurnee on, I totally remember. That was a big memory because that was always super exciting.”

For more information and to grab your copy of The Family Table, click HERE.