This week, former president Barack Obama delivered the 16th annual Nelson Mandela Lecture in a Johannesburg stadium brimming with dignitaries, kings, celebrities and everyday citizens from South Africa and all over the world. The speech’s theme, in anticipation of Madiba’s 100th birthday today, was centered around his enduring effort to promote a values-based society. Obama delivered a resounding call to action to combat the current challenges to our democracy, reminding us why he is “Forever our President.”

Retracing Mandela’s values in his long walk to freedom that led not only South Africa but the world to embrace democracy, Obama focused on the challenges facing us “in these strange and uncertain times and political climate.” And for one hour and 20 minutes, he detailed the roadmap toward a brighter future.

The speech, offered a sweeping challenge for everyone — governments and individuals alike. The world was asked to continue advancing Mandela’s vision of equality, justice and freedom. Obama reminded us all that Mandela used his vision to transform a world once filled with “violence and repression and ancient hatred” into a world that has become “steadily freer, healthier, wealthier, less violent and more tolerant” than ever before.

The former president was quick to point out that although we have made strides, the new political elite are chipping away at the foundations of our democracy, noting that we are at the brink of reverting “to an older, a more dangerous” and brutal manner of doing business.

In typical Obama fashion, his speech was a thinly veiled indictment of the politics of the current administration whose policies have ushered in an era where every societal norm giving rise to democracy is under attack. A world where capitalism is ruthlessly advanced by censoring free speech and slowly creating a state-controlled media. 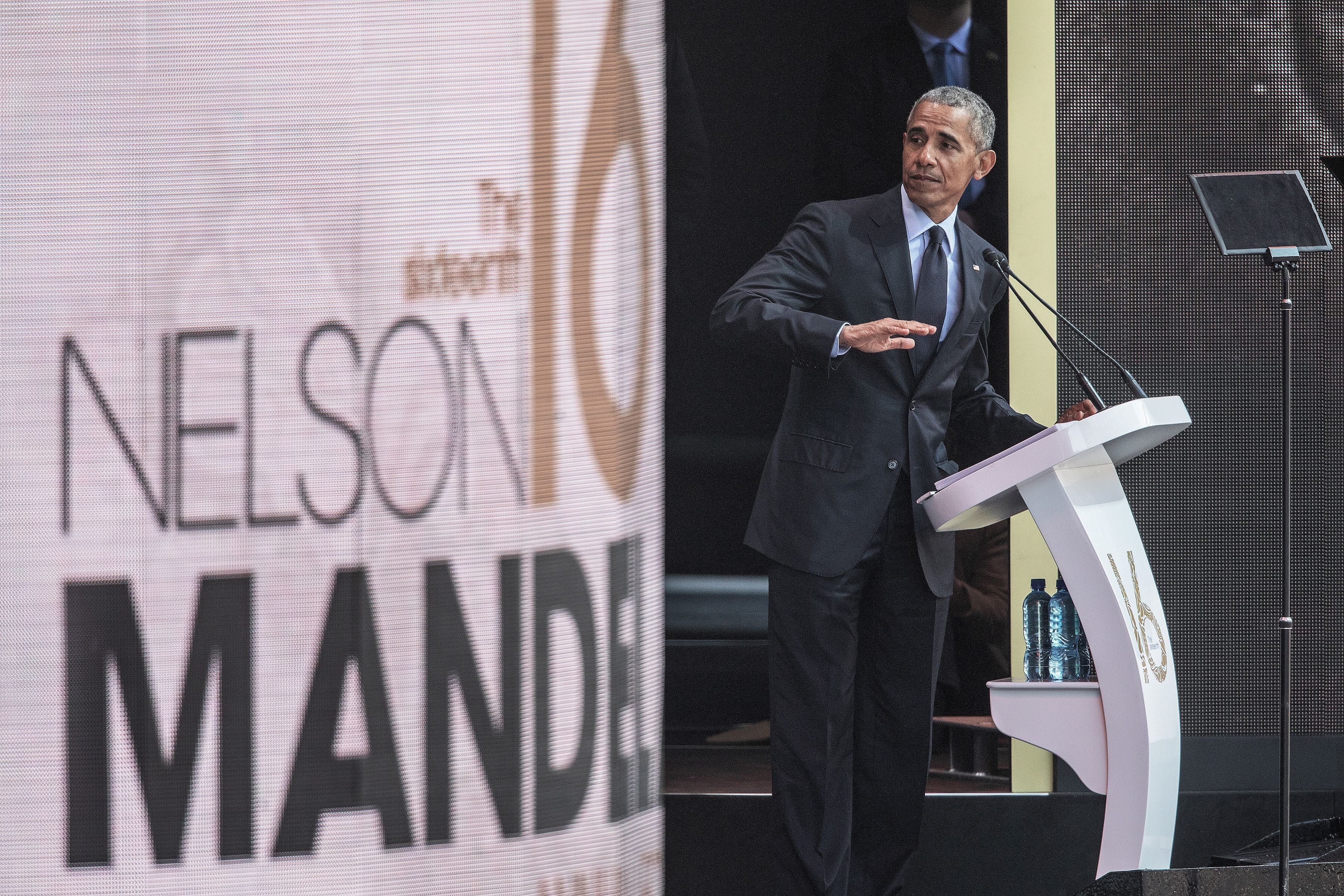 Obama’s task, he said, at this moment in time of Madiba’s 100th birthday, was to provide a roadmap back to a democratic society that embraces “equality, justice and freedom” using Nelson Mandela’s vision. “I believe in [his] vision shared by Gandhi and King and Abraham Lincoln,” and by embracing those philosophies, we can overcome the policies and politicians currently undermining our democratic society.

Obama said given globalization, he needed to amend Mandela’s philosophies just a bit, adding that in order to get there, we’re also “going to have to build…and figure out how [to] close this widening chasm of wealth and opportunity.” He suggested using “inclusive capitalism” between nations and embracing technology as methods of closing the economic gap.

Obama’s plan also included utilizing Mandela’s principles of humanity and civility, noting that “each individual has inherent dignity and worth.” That no matter the superficial differences between us, decency should simply be the norm. “I would have thought we would have figured that out by now. I thought that basic notion was well established,” Obama said. He called on truths that have been universally accepted as evident to “do unto others as we would have them do unto us. That we see ourselves in other people,” as the great economic and political equalizers. “And if you doubt that” Obama said, “just ask the French football team that just won the World Cup. Because not all of those folks look like Gauls to me. But they’re French.”

He also called on the principles of a fair and just society where majority rules, and a society where minority and other opinions are safeguarded. He called for a government that exists to serve the people, “and not the other way around.”

Obama cautioned us against rejecting the truth. Without naming names, he lambasted the Trump administration’s penchant for lying. “People just make stuff up!” he said, noting that there’s an “utter loss of shame among political leaders when they’re caught in a lie and they just double down and lie some more.” He said, not “lying to people seems pretty basic, I don’t think of myself as a great leader just because I don’t completely make stuff up. You’d think that was a baseline.” But he cautioned us that those lies carry over into the administration’s governing, by denying basic scientific facts such as denying climate change, decrying this data as politically inconvenient. “And, as with the denial of rights, the denial of facts runs counter to democracy, it could be its undoing.”

But Obama called on us to continue to embrace Madiba’s example of “persistence and hope.” Noting that the fight for democracy isn’t always swift or easy. Even Mandela’s fight for political freedom lasted 27 years. “Mandela ‘split limestone in the heat,'” he said. “He slept in a small cell, and was repeatedly put in solitary confinement.” But, “if you stick to what’s true, what’s in your heart, and you’re willing to sacrifice for it, even in the face of overwhelming odds, that it might not happen tomorrow…Things may go backwards for a while, but ultimately, right makes might, not the other way around, ultimately, the better story can win out.”

To get there, Obama said, is everybody’s duty, it is the collective spirit, as he called it. Obama challenged the youth: “my message to you is simple, keep believing, keep marching, keep building, keep raising your voice. Every generation has the opportunity to remake the world.” And our challenge as adults is to help them succeed.

And lastly, Obama called on us to embrace Madiba’s challenge to love. For “love comes more naturally to the human heart,” he said. “Let’s see [love] as our North Star, let’s be joyful in our struggle to make that truth manifest here on earth so that in 100 years from now, future generations will look back and say, “they kept the march going, that’s why we live under new banners of freedom.”