Earlier this week, Donald Trump – on a national stage during the first of three presidential debates – offered one solution to tense race relations and one of the latest police-involved shootings to dominate headlines.

With little to no understanding of how Black communities are under the scourge of unfair and discriminatory criminal justice practices – or how police violence historically targets Black men, women and children –the Republican presidential nominee perpetuated a system that has disenfranchised communities of color and lends itself to the legacy of injustice and racism in this country.

The frustration from activists, protestors, organizers, citizens and allies that this rhetoric continuously puts marginalized communities all over the world at risk is evident in how vocal these groups are, but also movement work to which they are committed.

And this weekend, at the Bouckaert Farm in Chattahoochee Hills (just south of Atlanta, Georgia), Harry Belafonte’s legacy project, Sankofa, will bring artists, activists and community together for a chance to heal and discuss innovative solutions to the world’s human rights issues at the Many Rivers to Cross music and arts festival.

The festival, which runs from October 1-2, is an opportunity for artists to come together to “leverage their music and art to unite people around issues of social justice and human rights.”

“You can party with a purpose and you can spend money that will go to good,” Gina Belafonte, co-director of Sankofa, told ESSENCE.

“We have an opportunity to unite and be in solidarity and exhibit to the larger community all of us coming together nonviolently and looking for progressive solutions to some of the existing problems and how to activate those solutions,” she said.

Belafonte, the daughter of icon and activist Harry Belafonte, recognizes that the festival –which features sets from John Legend, Estelle, Common, T.I, Public Enemy and will feature appearances from Jussie Smollett, Jesse Williams, Chris Rock and more – is bigger than your average outdoor festival. 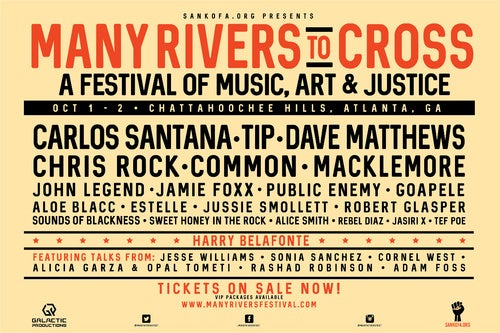 Many Rivers To Cross

“We wanted to make sure we were able to educate around the issues and give our guests an opportunity to learn more about the organizations nationally and internationally that are participating in movement building,” she said.

Proceeds of the event will be distributed to multiple organizations through Sankofa, the social justice organization founded by Harry Belafonte.

It’s that legacy of Belafonte to elevate the voices of the disenfranchised that drew artists to the festival, including singer Estelle, who met Gina Belafonte while organizing in Flint, Michigan after the water crisis.

“This is something that’s close to [Gina’s] heart. She watched her father do it but it’s also something she wants to do,” Estelle said about Sankofa’s work. When asked to participate in the festival, Estelle immediately jumped at the change.

“Without a second thought it was like yeah, of course,” she told ESSENCE.

“In this capacity I’m definitely out here because I live in the U.S. now. I’m part of this great tapestry,” the UK-born singer said. “This is my ninth year in US; I’m part of it. I just want people to know what’s going on.”

Estelle joins a variation of artists and organizers participating in the event that will both be a space of healing and movement work. A space where people can escape the realities of our current state, come up with solutions in a safe space, and celebrate life, love and music.

“I want them to feel that energy. That’s my main purpose is to bring joy. To give that vibe for the day,” Estelle said.

“Music is one of the most powerful vehicles for community and across the board.”

You can purchase tickets and check out the line up here.