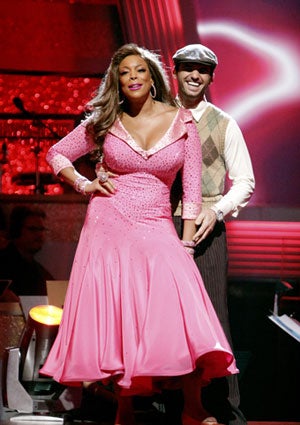 Wendy Williams was eliminated from “Dancing with the Stars” last night, after earning the lowest scores of the night. The television host earned 15 out of 30 points for her dance number with partner Tony Dovolani. This week, contestants had to dance to a song that told a story about themselves, and Williams selected a foxtrot to “Last Night a DJ Saved My Life,” which reflected her ambition to start her career in radio.

Williams appeared grateful for her time on the show, saying it was “a wonderful opportunity.” She elaborated how her busy schedule may have interfered with her ability to fully focus on her dance moves. “I’m probably the busiest person in terms of flying back and forth. In addition to that, I have a marriage and a child and a litany of other things to hold together,” Williams said, referring to her “DWTS” appearances in L.A. and taping her talk show in New York City.

The fox-trotting TV host also appeared to cover up any hard feelings by suggesting that since she will no longer be on “DWTS,” she can now get back to business as usual. “I got to do this in front of millions of people! With that said, I’ll do the rest of the talking tomorrow, on ‘The Wendy Williams Show’!”

Do you think Wendy should have been sent home?