By Paula Rogo · Updated October 23, 2020
Three years ago, Zonnique Pullins, daughter of Tameka “Tiny” Cottle, decided to go down the same route as her mother and change her eye color with implants. But now the 22-year-old is saying that the procedure, which changed her eye color from brown to a “grayish blue,” wasn’t the move for her despite initially saying that she “really loved them.”

Pullins appears to have reversed the procedure earlier this year. So when a fan asked her about it on her Instagram page, the reality star admitted that the experience came with complications. 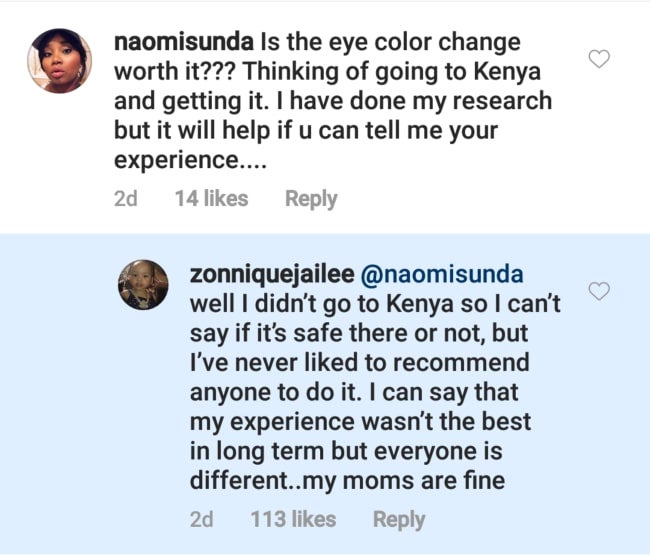 “I’ve never liked to recommend anyone to do it,” she told a fan, who considering getting the same procedure. “I can say that the experience wasn’t the best in the long term but everyone is different.” “My moms are fine,” she added, referencing Tiny’s surgery. In 2014, Tiny opened up about her decision to travel to Tunisia to undergo a controversial surgery to permanently change her eye color from brown to “ice gray.” “They told me the procedure would be quick, like five or ten minutes in my eye. They woke me up and it was very blurry, and then it kind of just fades in. I looked in the mirror and I was like, they’re amazing,” she told ABC News. “I just wanted to do something different,” Tiny added. “And I have the right to do that. It’s my body.” We are glad that Pullins is able to share her wisdom!
TOPICS:  Tiny Harris zonnique pullins