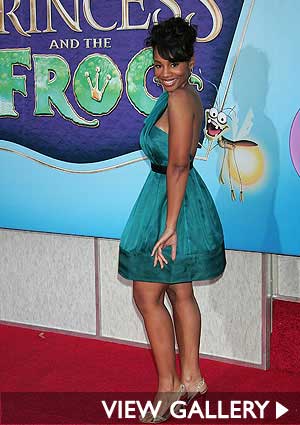 For decades, our images were rarely featured in mainstream fairytales, but a new day has come. This holiday season, Anika Noni Rose makes history when she’s crowned as Disney’s first, Black Princess–Tiana–in ‘The Princess and the Frog.’ With credits spanning stage (‘Caroline, or Change’), film (‘Dreamgirls’) and television (‘The No. 1 Ladies’ Detective Agency’), the 37-year-old Tony Award-winner is intent on keeping her good fortune rolling.

Essence.com caught up with Rose to chat about landing her dream job, seeing herself in animation and how she hopes to switch things up for her next, big role.

ESSENCE.com: What was your initial thought when you heard there was going to be a Black animated princess?
ANIKA NONI ROSE: Oh my God, I was thrilled. [Working with] Disney has been my dream, so I just focused on getting the part and when I did, I called home screaming! [laughs] There’s no reason why a girl from Connecticut would end up being the first Black Disney princess.

ESSENCE.com: Well, there’s no reason why not, either! Weren’t Jennifer Hudson, Alicia Keys and Tyra Banks being considered, too?
ROSE: I read that they were, but I don’t know any details. Ultimately, that didn’t matter to me because I was competing against me. As an actor, if you spend so much time thinking about how many other people are coming into a room, you’ll psyche yourself out before you even get there.

ESSENCE.com: How did you feel when you saw Tiana on the big screen for the first time?
ROSE: When I saw Tiana, with my expression on her face, in color, standing in the moonlight, surrounded by sparkles–I was truly undone! I’ve been crying for a year– seriously.

ESSENCE.com: What does it mean to you to be making history?
ROSE: The largesse of it all didn’t hit me [in the beginning], but when they unveiled the doll to me, I remember thinking, “There’s a doll, based on me and the work I’ve done, that’s going to be here for these little girls–and she’s glamorous.” This movie is showing the world a different picture of Black America, which is phenomenal. It’s just phenomenal.

ESSENCE.com: What were your feelings about the initial criticism surrounding the film, specifically relating to the prince not being Black and the firefly being a bit…ethnic?
ROSE: I was surprised by some of the things that the community took issue with, especially considering the amount of negativity that’s in the world about us, on TV and film. But I think it’s really about us not ever having this happen before and wanting to have some control over our image, because we so rarely do. There’s a lot of humor in the film. There are also a lot of touching moments that I think are very genuine and it’s all been done with such love, which you can see in the details. You can see it in Tiana’s little, round nose and in how she moves…and that firefly’s funny!

ESSENCE.com: So, what can we expect from you next?
ROSE: Well, I’m co-composing a musical for Broadway. I’m reading a lot, too, and I’m always looking for books that are a possibility to make. I’d love to do some foreign film and also, an action movie where I could wear a boot–a heel–and beat somebody’s butt. I’d be 5’2″ and just punching and kicking…in leather! [laughs]

The Princess and the Frog opens nationwide on December 11th.