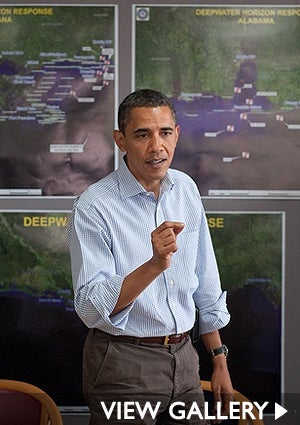 One aspect of President Obama’s leadership style — which, depending on whom you ask, is either frustrating or admirable — is that he does things on his own timetable, in his own unflappable way. Despite weeks of criticism that he appeared disengaged from the Gulf Coast oil spill, the President didn’t give his first major news conference on the disaster until 38 days later, after his administration had measured the viability of every possible solution, and deployed a range of steps based on expert analysis. He answered questions from the press in his usual professorial manner, giving detailed explanations — without emotional sound bites conveying the anger that many people wanted to see. And while unleashing his inner Angry Black Man won’t fix the problem any faster, calls for the President to show more outrage over the crisis mounted. There were not-so-hilarious remarks from comedian Bill Maher (“This is where I want a real Black President. I want him in a meeting with the BP CEOs, you know, where he lifts up his shirt so they can see the gun in his pants…”), as well as digs from political strategist James Carville (“It just looks like he’s not involved in this. Man, you got to get down here and take control of this…”) and director Spike Lee (“He’s very calm, cool, collected. But, one time, go off!”). In a Today Show interview this morning, President Obama appeared to heed some of the commentary. “I was down there a month ago, before most of these talking heads were even paying attention to the Gulf,” he told Matt Lauer. “A month ago I was meeting with fishermen down there, standing in the rain talking about what a potential crisis this could be. And I don’t sit around just talking to experts because this is a college seminar; we talk to these folks because they potentially have the best answers, so I know whose ass to kick.” Again, depending on whom you ask, the President is either starting to bring the tough-talking smackdown that the situation warrants…or he’s giving in to pressure to make showy gestures instead of just focusing on handling the spill. As someone who appreciates the President’s pragmatic and cool-headed demeanor, I fall into the latter category. It’s a shame that so many find sound bites to be necessary, when what matters is what he’s actually doing to clean up the spill, hold BP accountable, and make sure it never happens again. What do you think of President Obama’s response to the spill? Do you think he should show more visible outrage? For more of Cynthia Gordy‘s Obama Watch stories, click here.