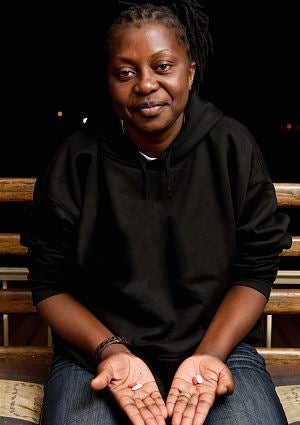 To date, HIV/AIDS has killed over 20 million people in Africa. Zambian natives Constance Mudenda (pictured) and Muhau Concillia almost became part of that statistic had it not been for gaining access to anti-retroviral medicines (ARVs), which cost about 40 cents a day but are still not affordable to many HIV positive people in Sub-Saharan Africa. Mudenda and Muhau are featured in “The Lazarus Effect” which airs on HBO tonight. They spoke with ESSENCE.com about why they’ve chosen to go public about their status and why they think African-American women are at an advantage. ESSENCE.com: How long have you been on ARVs? MUHAU CONCILLIA: I’ve been on ARVs since 2005. I stopped briefly because I thought was okay, and then I got sick again. I never had enough information about how long I’m supposed to take my them so when I got sick again is when I returned to them. CONSTANCE MUDENDA: I started taking ARVs six years ago.  ESSENCE.com: What went through your mind when you found out you were HIV positive? MUDENDA: Relief. The whole process is very scary but after being testing and finding it felt like the burden was being lifted from my shoulders. I had been thinking about it since 1996 but I couldn’t take the test and then I finally did and it felt like a new start to my life. ESSENCE.com: New start? You don’t hear many people calling an HIV diagnosis a new beginning. MUDENDA: It was a new start to my life because from there on I looked at life differently. CONCILLIA: When I found out I was HIV positive, I was initially in denial. It was a shock but I was very sick and had to accept my condition. ESSENCE.com: What misconceptions do people have about you now that you’re public about your status? MUDENDA: I went public the day I found out I was HIV positive. Basically, I don’t care what people think about me because it’s my life. I believe that stigma starts with me. If I start thinking what will so and so think, then it would be bring me down. My status is my own: if I want to talk about it then I’ll talk about it. CONCILLIA: People talk and they will never stop and when you open up about your status, it also encourages other people to be open about their status. ESSENCE.com: As HIV positive African women how do you want people to help? CONCILLIA: I want people to help African countries. I want them to look at things from my perspective because my life depends on ARVs. They are like my food and water. They are our future. MUDENDA: I want the whole world to take action by putting pressure on the powers that be because they are the ones making decisions so that ARVs are provided for the people that need them. ESSENCE.com: Do you feel like people are no longer thinking of HIV as a death sentence because of ARVs? CONCILLIA: It’s easier when someone knows their status and takes action. It seems like people are no longer looking at their status as a death sentence. ESSENCE.com: Let’s be honest, when talking about HIV and AIDS, some people still think of Africa even when when study after study shows that it is in our backyards. MUDENDA: This is not an issue for Africa. It is an issue for every individual who lives on this planet. When I first came to America, Atlanta to be exact, I got the feeling that HIV is a dead topic. People are pretending that it’s not “our” problem. I can tell you that I am proud because I’m an African that is doing something about it while people are pretending everything is okay. Americans will look away, meanwhile things are boiling and simmering and the day this volcano erupts, the cases will double and triple because there are all those re-infections and people with multiple concurrent sexual partners.   ESSENCE.com: What would say to African-American women? MUDENDA: I would ask them what makes them not talk about HIV? Is it security? In Africa we say HIV has the face of a woman because women are the worst affected due to decisions being made by men. As women we are taught that we are to submit to our husbands. So it’s like the women carry the bigger burden for HIV and AIDS. But I know African-American women are independent and if they don’t want to talk abbot HIV then I think they’re being cowards. They make decisions, and they have a government that can back them up when they decide to mobilize around the issue. “The Lazarus Effect” airs tonight at 10pm on HBO.