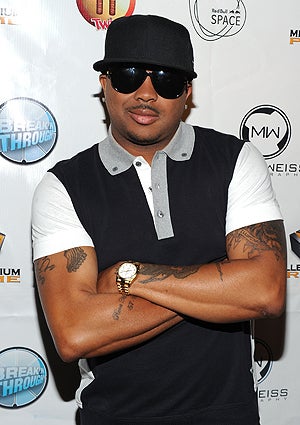 Like Smokey Robinson and R.Kelly before him, The-Dream possesses a natural talent in speaking to women. The singer-songwriter, born Terius Nash, blends Atlanta’s bass with R&B’s traditionally emotive lyrics to create songs like Beyonce’s “Single Ladies,” Ciara’s “Ride” and his own sultry single, “Falsetto.” Last year, The-Dream, who also penned Rihanna’s hit “Umbrella,” married singer Christina Milian after a whirlwind romance, and the couple recently welcomed their first child, a daughter named Violet. Like many celebrity couples, rumors abound that the two aren’t happy because The-Dream is getting his jollies elsewhere. Believe it?   ESSENCE.com chatted with The-Dream about his marriage, the blog-fueled rumor mill and his new album, “Love King,” out today.   ESSENCE.com: We recently saw a rumor that you and wife Christina are experiencing issues because you’re galavanting around Atlanta with fans. True? THE-DREAM: Whoever thought that blogs would dictate our conversations, [the writers] must be in their bedroom saying “Look what I can do.” It’s actually sad to have to entertain it. The rumors are not true and it really boils my blood. Christina and I are cool. People keep asking, “Why haven’t we seen you guys out together?” I’m working, that’s why you haven’t seen us. She’s at work too in Los Angeles. The women in the pictures are actually legitimate friends of mine. The photo with me in the car with another woman, she’s a good friend who’s at my house all the time. It’s sad, because [the blogs] have humiliated her. She feels bad, I feel bad and you don’t know what that [judgement] does to that person. Who takes responsibility for that? I understand freedom of speech but if I made my living spreading rumors about people, my family wouldn’t claim me.   ESSENCE.com: How are Christina and baby Violet?   THE-DREAM: Violet is great, I just saw her last night. She’s three months and one week old with a definite personality. I think she’s going to be a sassy talker. Right now, she’s just long, fat and looks like me. I know Christina hates it because she’s looking at the baby like “Where am I? I did all the work for nine months!”   ESSENCE.com: Do you help Christina out when you’re home?   THE-DREAM: I don’t because my “helping out” turns into expectations. I’ll get Violet on a late night maybe one or two times, but after that, no. If Christina’s tired, call the nanny, call Violet’s granny. We got people.   ESSENCE.com: Has Violet met her sister, Navy, your daughter from your previous marriage to singer, Nivea? THE-DREAM:  Navy, who’s five years old, hasn’t seen Violet yet because Christina’s been working in Los Angeles, but that’ll change for the BET Awards later this month. I may bring Navy to Los Angeles with me. She’s also full of personality, right now she’s all about herself.   ESSENCE.com: You’ve joked that you’ve stopped buying Christina gifts, and are giving them all to Violet. Still true? THE-DREAM: Definitely. I just opened two trust funds for Violet. When my children get to a certain age they should be taken care of, even though the economy is crazy right now. Most of us are just trying to hold on and handle the everyday bills. But just in case, I like having something there for my family because people in this business make a lot of money and can lose it all. ESSENCE.com: What effect did re-marriage have on “Love King”? THE-DREAM: I think I’m more of a bad guy on this album and I don’t think Christina had a lot to do with it. I live in a certain creative place when I make an album. I could be writing about something I experienced two years ago, that I’m just dealing with now. I have stories and I’m willing to tell them how I see it. I think that’s why people appreciate my music. ESSENCE.com: You’ve said you’re going to end your solo career after “Love King,” still true? THE-DREAM:  I thought about going out with a bang, but I’m Black, I could be telling a lie. My decision would never be based on sales or where my singles sit on the charts. My career is really based in writing and production and when I’m performing, that part of my career takes away from my production side, so really the choice to stop would be to make sure my production business remains in tact.   ESSENCE.com: You’ve said that you wanted to work with R.Kelly, did you find him? THE-DREAM:  We’re actually putting something together for his next album. I don’t know what his release timetable is for his next album, but I’m sure the music will decide when it will happen but there’s no definite time.   ESSENCE.com: What’s your favorite song from “Love King”? THE-DREAM: “Take Care of Me” which will be on the deluxe edition that also drops on June 29 with five more songs than the regular version. The lyrics of “Take Care of Me” say I’m here to do what I said I was going to do, I’m not like those other people you’ve dated, but don’t play because I’ll break it down and start all over again with someone else.   ESSENCE.com: What about your track “Panties to the Side”? Is that what we think it is?  THE-DREAM: It’s about a quickie. When you can’t really get into it all the way and you can’t take the panties all the way off, so you just push them to the side. Sometimes you do it just because it’s hot. You have no reason not to take your clothes off but you just keep them on. Everyone at ESSENCE.com should try it, call your man at work and tell him “I want you to come home and pull my panties to the side!”