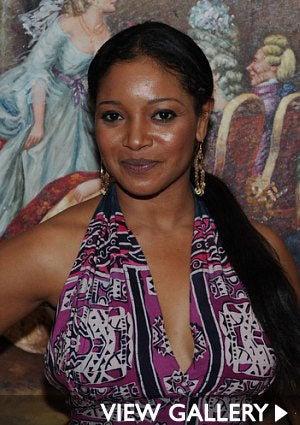 Last week on ESSENCE.com, we had a very robust conversation about why many Black women over 40 were childless. It seemed serendipitous that we would talk to actress Tamala Jones about her role in the upcoming film “35 & Ticking” — about a pair of best friends (played by Jones and Nicole Ari Parker) who want to have kids, but for different reasons have not been able to. Jones dishes on her character, Victoria, a 30-something woman whose marriage falls apart just as she’s ready to start a family, and tells us why she’s not 35 and ticking… ESSENCE.com: Tell us about your character, Victoria, in “35 and Ticking.” Tamala Jones: Victoria is in her early 30s and has been married for three years. She wants to start a family, and every time she brings up the discussion, her husband moves away from it. She has a best friend named Zenobia. They grew up together and always said, ‘When we get older we’re going to live next to each other and we’re going to have babies together.’ Now that they’re older, they see that they don’t live next to each other, Zenobia isn’t married yet and Victoria’s husband won’t give her any children. She finds out later that the reason why he doesn’t want to [have children with her] is because he doesn’t know how long he’s going to be married to her. They get a divorce and she ends up seeing him a year later in a shopping mall and he’s with a White girl and she’s pregnant. Her heart just crumbles. ESSENCE.com: Wow! What is that like for your character?   TJ: To see her ex-husband with someone else having the life that she wanted was a moment of clarity for her. It was time for her to move on. She began to see that whatever happened had nothing to do with her — and whatever she wanted, she could have it. ESSENCE.com: How does she move on? TJ: By talking to her friends. When you have great friends and you’ve known them for a long time and you have shared your experiences with them, it’s just therapeutic. They give you the strength that you need to say, ‘Okay, this is not going to work. What do I really want and how can I get it?’ I think that’s why a lot of Black women are single and don’t have children because it’s like, ‘I’m not going to take just anything and I’m not going to settle. I’m going to have what I want.’ ESSENCE.com: Being that you’re 35, how do you define yourself? TJ: I’m still such a big kid. I know I’m 35, but I just have so much to do that I make myself younger in a mental way. I want to get out there and help young girls, which is why I joined the charity Girl Prep to bring self-esteem awareness to young girls. I want to direct and do more producing and I have a one-woman show that I eventually want to put on. I have so much to do that I don’t have the 35 and ticking thing. And I want to say that just because you’re in your mid-to-late 30s, don’t put the pressure on yourself to start a family unless that’s something you really, really want to do. Right now I don’t want to be married and I don’t want to have any children, but I definitely do in the future. I want to get married and have about four babies. After director Russ Parr yelled “cut!” for the last time, Tamala Jones threw a wrap party at her home to celebrate the making of “35 and Ticking.” Check out the intimate affair.