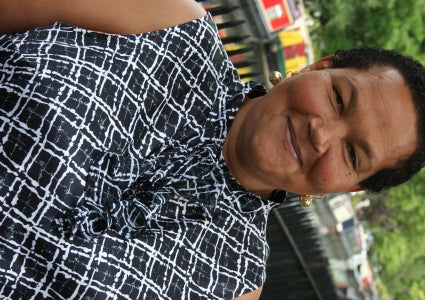 Most can’t imagine being disowned and estranged from their parents for 27 years, but Sandra Laing, a “colored” South African woman experienced that and more during the country’s days of apartheid. Born to White (Africana) parents, Laing was born with African features and a golden complexion which caused much controversy and eventually forced her to claim the race that the South African government believed that her physical attributes mirrored–Africans. Today Laing’s life story will be shared with the world as the biopic, “Skin,” opens in theaters. London-bred actress Sophie Okonedo immortalizes Laing on the bring screen and delivers an Oscar-worthy performance. ESSENCE.com caught up with Laing, the mother of five and grandmother of eight, to discuss her thoughts on the film, her relationship with her siblings and why she wants everyone to keep her in prayer.

ESSENCE.COM: Ms. Laing, you’ve been through things as a child and adult that the average person couldn’t fathom. Is it difficult to watch the film and what do your kids think about it? How have you remained so resilient through the years?
LAING: At first it was difficult, but not now. [My kids] say that it’s a beautiful film and they are glad that they are talking about it. But they are angry about my brothers and want them to come and see me because they haven’t met my brothers.

ESSENCE.COM: Although you were born to White parents, did you ever feel any hatred toward them or their race?
LAING: At first I was very angry of White people and angry of the apartheid government for [making me choose to be a different race other than my parents], but I decided that it doesn’t help to be angry. I had to learn to go on with my life and forget what happened. I was classified colored and I loved all Black people. I’ve got colored and Blacks in my family and most of my friends are Black and [that’s what race I most identify with].

ESSENCE.COM: You endured a turbulent relationship with your first two children’s African father, who also despised you for the color of your skin. How long did you suffer from his abuse?
LAING: In the beginning of our relationship we had a wonderful time together but when he started to drink and beat me up I had to leave him because I was afraid I’d be killed. We had a little shop and he’d take the money and go get drunk and then come back and ask me what I did with the money. After two years, I couldn’t take it anymore and I took the kids and Ieft. I did suffer because I didn’t have a place to stay since I didn’t work. We were staying at people’s houses and doing anything to give my children food, but I’m glad everything is over. My children have grown up and married.

ESSENCE.COM: You are a middle child and have an older and younger brother who both look White and with whom you haven’t spoken to since you decided to leave home and change your race. Are you hopeful that you all will reunite?
LAING: I haven’t given up hope that they will come to their senses because I didn’t do anything wrong. I didn’t ask to be like this. I hope they will come and see me one day, meet my children and the rest of my family. I’m sad that I couldn’t ask my father for forgiveness before he died. I did ask my mother and did get to see her before she passed. My brothers are still angry that I chose a Black man [as my mate] and left home with him. I just feel that I hurt my parents and brothers and hope that I can see my brothers one day and apologize to them.

ESSENCE.COM: In parting, what do you hope folks will learn from your personal trials and tribulations?
LAING: I want people to know if something happens in your life and that you mustn’t be shy to talk about it. I used to always be very sad, angry and wanted to be alone, but since the film I’m healing; it’s helped me a lot and I’m happier now. I would do the same thing over and over again and not change anything about my life. I just want to say that people must pray that my brothers forgive me because I do miss them a lot.