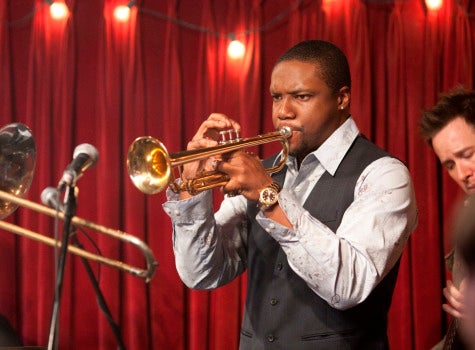 Perhaps you recognize him from his film debut in “Finding Forrester” back in 2000. Or maybe, he looks familiar from his turns in the sports-driven dramas “Coach Carter” and “The Express.” Either way, Rob Brown is now N’Orleans-bound to take on the small screen in HBO’s post-Katrina drama series, “Treme.”   Set three months after the hurricane, the 10-part series (and brainchild of the creative team that brought us “The Wire”) tells the story of a city’s vibrant spirit and the people at the center of reclaiming its culture. So, where does Brown fit it? He’s caught in the tight spot between following his dreams and staying connected to his kin. “He’s a young, talented trumpet player who doesn’t want to be locked down in New Orleans as a local musician,” he notes about his character, Delmond Lambreaux. “They always say that jazz was born in New Orleans, then grew up and moved to New York. That’s Delmond’s conflict, too. He wants to do new things and progress in his career, elsewhere, but his family obligations keeps dragging him back home.” While music plays a large role, the city of New Orleans is really the central character in the series. “Being in New Orleans has been a great experience for me,” says Brown, a native New Yorker. “A lot of people think that the city is [thriving] because they see that the Quarter and uptown are back, but that’s not all of the city. Nothing can compare to seeing how ecstatic the people were when the Saints won the Superbowl, but you also listen to the news and hear about corruption…then you go out and have a great meal. It’s really kind of bittersweet.” So, what’s next for the actor? He’s open, so much so that he even indulged us in speaking of himself in third person. “It’s not usually my style to talk about myself in third person, but since you asked…Rob Brown just turned 26, so he’s still a young guy,” he begins, with a laugh. “He also listens to a lot of Jay-Z records, one in particular [which states that] ’30 is the new 20,’ which would make him about 16. So, Rob’s got a lot to learn and he’s enjoying learning it.” “Treme” premieres on HBO this Sunday at 10pm. Read more: