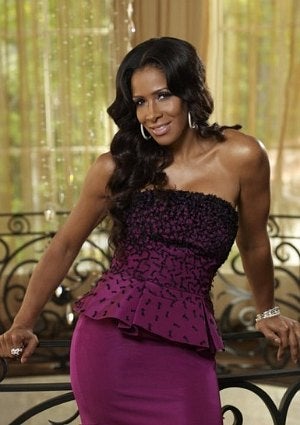 If each “Real Housewives of Atlanta” cast member had their own theme song, we bet Sheree Whitfield’s would be Patti LaBelle’s “New Attitude.” Fresh off a long and nasty divorce from former NFL player Bob Whitfield, Sheree is loving her new-found freedom on season three. She’s also pursuing her new passion for her acting career and dating. Whitfield spoke to ESSENCE.com about her date with the infamous (some say fraudulent) Dr. Tiy-E Muhammad and how she really feels about cast mate Phaedra Parks’ husband Apollo’s having spent time behind bars… ESSENCE.com: What do you think of season three so far? SHEREE WHITFIELD: I’m liking it. For me this is a really fun season because I’ve got my happy back and I think it definitely shows. You guys are going to see me in a different light. ESSENCE.com: On last week’s episode you went on a date with Dr. Tiy-E Muhammad and by the next day people were accusing him of being a fraud. Did you know anything about that? WHITFIELD: Well, all of that plays out on the show so I can’t really say. But I thought it was very interesting how the next day I got tons of calls and texts and emails about Dr. Tiy-E and our date. ESSENCE.com: Will you be going out on any more dates with him on the show? WHITFIELD: Yes, I will. I wish I could tell you more but you just have to tune in. ESSENCE.com: Are you dating anyone else special off-camera? WHITFIELD: Yes, I am. I haven’t found anybody that I want settle down with yet, but I’m having fun. ESSENCE.com: You also seemed surprised when Lawrence told you that Phaedra’s husband Apollo had been in prison. Did that change how you see them? WHITFIELD: I didn’t know Apollo, and hadn’t met him prior to that episode. But now, getting to know him and Phaedra, it doesn’t change anything. Everybody makes mistakes. It’s not like he murdered or raped somebody. Here he is back in society, and who am I to judge? ESSENCE.com: You call yourself a Black woman in a White woman’s body. We had no idea you couldn’t dance… WHITFIELD: [laughs] I only dance in front of my family. So when Dr. Tiy-E took me dancing on our first date I was a little intimidated, but I had a good time. Now it’s something that I really want to learn to do. ESSENCE.com: We’ll be seeing more of you pursuing acting this season. How did you catch the acting bug? WHITFIELD: I got a phone call to do a play back in December, and they wanted me to do the lead role. I was like, ‘Are you kidding me? I have no acting experience.’ But after a couple of weeks of consideration I was like, ‘okay I’ll try it,’ but I took a lesser role. Honestly when I got on stage, Sheree was gone and I was somebody else. ESSENCE.com: Your shoe game is always correct. How many pairs of shoes do you really own? WHITFIELD: Oh my goodness, I give some of them away. I probably have about a 100 pairs in my closet. I’ve always been a shoe girl, and always into fashion. Always! For more of the “Real Housewives” drama you love, click here.