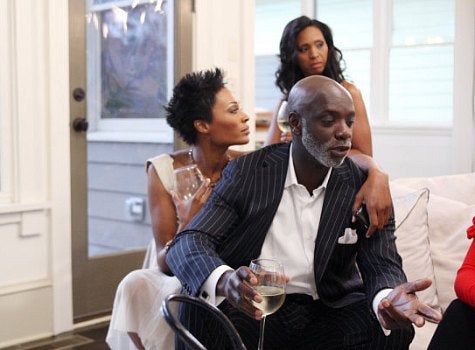 Peter Thomas is one lucky guy, and he knows it. The 50-year-old restaurateur recently tied the knot with model Cynthia Bailey, which is no easy feat. Just ask Russell Simmons and former basketball player Jayson Williams. Accomplished in his own right, Thomas says he understands Bailey’s reservations. “She’s an independent woman and I love that about her,” he says. The nightclub impresario spoke with ESSENCE.com about meeting his wife some 18 years ago, dating famous women (Nia Long?) and how he really feels about  the “RHoA” castmates, especially Phaedra Parks. ESSENCE.com: What do you think when you watch yourself on the show? PETER THOMAS: I can’t stand it. I don’t like the way I sound; I always look crazy. I usually walk into another room when it comes on. ESSENCE.com: We don’t know that much about you. Do tell. THOMAS: I’m Jamaican-born, Brooklyn-raised, lived in Miami, had seven or eight nightclubs in South Beach for the past 20 years. I’m a New York, Miami dude, and I lived in London for a while. I get around, and Atlanta’s new to me. My parents live here. ESSENCE.com: How did you meet Cynthia? THOMAS: My dad got really ill so I came to Atlanta. I was looking for a vehicle and a friend of Cynthia’s told me she had a car and I got on the phone with her to start negotiating. I remembered meeting her on a plane from Miami to New York 18 years ago. I didn’t even want to be with anyone when I first came here, but after talking to her on the phone a couple of times I was like, ‘Wow I remember her. She’s cool and she’s beautiful.’ When we met again I was happy man. It was instant attraction. ESSENCE.com: Cynthia hasn’t been shy about her reservations towards marriage. What did you think of that? THOMAS: I’ve heard about Cynthia Bailey for the last 21 years of my life. You know Russell Simmons proposed to her, she turned him down. Jayson Williams made a public half-time announcement on TV, she took the ring and gave it back. People that I know, even exes, talk so well about her. She’s an independent person and I love that about her. She likes to know that she has her own and I understand why because of her mom. I respect women who are like Cynthia because I’m not one of those guys who think men are superior to women. I used to date Nia Long and she was making like $800,000 a movie, and I was cool with it. ESSENCE.com: What did you really think of Phaedra’s comments about wanting a “clean” man? THOMAS: Phaedra is like 36, 37 years old and word around town is she’s dated a couple of rappers she represented, so when she says “clean” she probably means someone that doesn’t have baggage so she doesn’t have to deal with mothers from previous relationships. My point to her was I’m a grown man and I have five kids, and there’s really nothing wrong with it. I would understand if she was like 22 and getting married but as old as she is saying that… the only reason Apollo is “clean” is because he’s been incarcerated for the last six years. She’s an idiot. That’s how I really feel about the statements that come out of her mouth. ESSENCE.com: How do you feel about the other castmates? THOMAS: I don’t really know them enough. I’ve been around Sheree a few times and she’s always cordial. NeNe, she’s loud. I could be around NeNe, she could definitely be my homegirl. Kandi’s a really nice person, and Kim’s just crazy. ESSENCE.com: Besides the grey beard it’s hard to believe you’re 50. THOMAS: I was with Russell Simmons last week and he was like, ‘I hate that beard, cut it off’ and I was like, ‘dude, my wife loves it.’ Some people tell me I look 35 when I cut my beard. They say Black don’t crack. Catch “Real Housewives of Atlanta” tonight at 10 pm on Bravo, and be sure to join us as we live tweet the show. Follow us at @essenceonline.