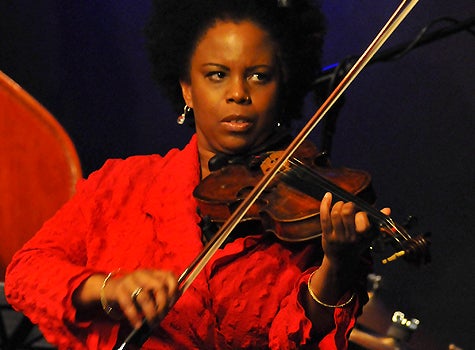 Regina Carter is simultaneously a widely known talent and secret treasure. The violinist and Detroit native, who currently resides in New Jersey with her husband, has performed all over the world, released seven albums and recorded with pop icons like Mary J. Blige and Aretha Franklin. Now Carter has set her sights on reaching back to her musical roots and exploring her affinity for musical patterns with the diasporic LP, “Reverse Thread,” which hit shelves on May 18. Carter will resume her national tour on May 25 in Seattle and is currently prepping a music video to be released soon. The accomplished musician sat down with ESSENCE.com to discuss the Diaspora, the meaning of “dirty music” and Detroit’s future. ESSENCE.com: Why did you decide to focus on music from the Diaspora when recording “Reverse Thread”? REGINA CARTER: I wanted to do world music because I’m from Detroit, which is such an ethnically diverse city. I heard all of this different music growing up and alot of it incorporated strings, where the violins could be included. When I got the MacArthur grant — a financial award of $500,000 for artists — it gave me time and money to research. ESSENCE.com: Initially you wanted to perform pieces from Black composers but refined your search to Africa specifically? CARTER: I wanted to do music from the Midddle East, then international Black composers, but just buying records and listening, I ended up on the continent of Africa. I didn’t want to concentrate on any particular style. Whatever I liked I wrote it down, so it became a mix of material because the continent is so huge, there’s no way to cover it all. ESSENCE.com: We’ve heard you like a ‘dirty’ recording? CARTER: Music is too clean with all of the technology these days, I like the dirt. I wanted to record everyone in the same room like the jazz musicians did in the 1960s. Fortunately, I’ve got a great engineer who found a studio and we used baffling — which is covering a stand alone wall with a blanket to help muffle the sound — to make the project sound grittier. ESSENCE.com: How did you come to work with kora virtuoso Yacouba Sissoko? CARTER: My friend recommended him to me. Yacouba’s from Mali and a very gentle person, but I was nervous to work with him because he’s such an incredible musician. The kora has 21 strings, I have trouble with my four! The whole way of learning music in Mali is passed down, so Yacouba learned from his grandfather and became a grio himself. He can hear something once, remember it and play it back, which is how I learned to play although it was through the Japanese technique, Suzuki. Now I’m more reliant on reading, but I want to get back to using my ears and strengthen that muscle. ESSENCE.com: Besides Uganda, Mali, India and Puerto Rico, what other countries inspired “Reverse Thread” and did you find a favorite sound? CARTER: I can’t say I have a favorite. We recorded a song called “Zerapiky” from Madagascar because the music was so catchy. Sometimes I hear music and get caught up, so when I initially heard this music, I really liked it. It’s filled with accordions and in this culture, only men are allowed to play the accordion and women are the drummers. I want to go check out more music, my dream is to go to Madagascar. ESSENCE.com: With seven albums under your belt, how did you begin your career? CARTER: After college, I went to Germany for awhile and when I came back to Detroit, my career started. I joined the group Straight Ahead, with Cynthia Dewberry, Gailyn Mckinney, Eilleen Orr, and Marion Hayde, which is when I hit the map, and we signed to Atlantic Records in 1992. I moved to New York City in 1995 and went solo not long after. ESSENCE.com: In 2002 you were honored to play a violin — the famed Guarneri “Cannon” — that was fashioned in 1743 and favored by composer Niccolo Paganini in Genoa, Italy. What was that like? CARTER: The story goes that Niccolo Paganini lost his own violin in a gambling debt and got the “Cannon” from Guaneri, a famous violin maker. This violin is special because it is so loud and has a bigger body than most violins. It’s usually kept in a vault and every year people compete to play the “Cannon” by playing Paganini’s technically challenging pieces. One day, a friend of mine in Genoa suggested I do a Jazz show with the violin and it just so happened the Genoa mayor was a huge Jazz fan, so they allowed me to play. Six months later, Genoa was voted the world’s most cultural city. ESSENCE.com: Finally, do you think your hometown of Detroit will recover? CARTER: My city is suffering but it’s slowly making a comeback. Dave Bing is really doing a good job, finally we have someone caring in the mayoral position. There are a lot of music clubs popping up and more to do than there has been in awhile. Detroit won’t go back to the city it was, but it’ll move forward.