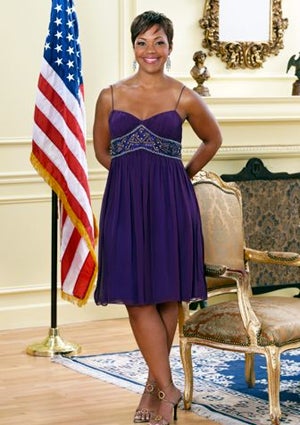 Last week we introduced Stacie Scott Turner, the one African-American housewife on Bravo’s “Real Housewives of D.C.” Stacie discussed growing up as an adopted child and how her experience inspired her to begin the charity Extra-Ordinary Life, which helps teen girls who are foster children in our nation’s capital to think beyond their circumstances. This week, ESSENCE.com chatted with Stacie about the “Real Housewives of D.C.” debut, her first impression of castmates Mary Schmidt Amons, Catherine “Cat” Ommanney and Michaele Salahi, and where all the Black folks are on “Real Housewives of D.C.” ESSENCE.com: How was your appearance on “The View” last week with the cast of “Real Housewives of D.C.”? STACIE SCOTT TURNER: It was great, we had dressing rooms with our names on them! That was an experience! ESSENCE.com: Speaking of, what happened with the Whoopi Goldberg vs. White House party crasher-cum-“Real Housewife of D.C.” Michaele Salahi scuffle? Michaele said Whoopi hit her, but then the talk show host denied it on “The View” the next morning? TURNER: That is so unfortunate because I’m a Whoopi fan. ESSENCE.com: On a lighter note, are fans recognizing you on the street after the debut of “Real Housewives of D.C.”? TURNER: A few have and it seems like viewers have really tuned into the stories of the “Real Housewives of D.C.” and people are excited about it from the comments we’ve been getting from people. ESSENCE.com: Let’s talk about Cat’s hating on Tyra Banks because you seemed to be personally offended by her saying that Tyra is not her favorite person. TURNER: The episode with Cat was the first time that she and I had intersected socially. So I’d invited Mary to my house and I invited Cat too because I wanted to get to know her. It was really about a first-time guest coming to your home and I was a little bit taken aback by how outspoken she was and how she was so negative about people that I think highly of. I perceived it as completely rude and off-putting for the first time you’re meeting someone. It’s interesting that if you look at it, what was driving her opinion was a personal disappointment and love for her husband. Of course if your husband is doing something great, you want everyone to support him, even the President of the United States! Nothing should be more important than his event, so as a wife and lover of my husband, I could see where she was coming from. ESSENCE.com: So Cat seemingly discrediting Obama, was more about Bush RSVPing to her wedding rather that Cat supporting Bush in your home as an Obama-supporter? TURNER: I think that it was hurt feelings. Her husband is a White House photographer and he’s taken a number of really memorable photos of Obama that have been plastered all over the place and the papers. So they’re clearly supporters of Obama and it surely wouldn’t make sense to speak negatively about him if he’s your husband’s employer, so there has to be more to it. ESSENCE.com: How about Mary Schmidt Amons supporting Black and White unity through “integrated” hair salons? TURNER: That was Mary having a good time at her birthday party and celebrating her day with plenty of champagne. ESSENCE.com: Birthday or not, we were wondering exactly what she was talking about. Obama in the White House means we should all get perms together? TURNER: Ha! That’s what I was thinking when I was looking at her, ‘what are you thinking?’ ESSENCE.com: Many of our readers, both on Facebook and ESSENCE.com, wondered since Washington D.C. is the “Chocolate City,” where are the rest of the Black folks? Besides your girl Shirley, of course. TURNER: That’s so funny that people recognized Shirley! She’s my hair dresser and a well-known stylist here in D.C. You’ll see Black people throughout the series and as the only African-American housewife, I know everybody is wondering if there’s any diversity, are there any Black people represented on the show? There are throughout the story because my world has a number of Black people in my circle and certainly with my friends and family, so don’t worry. ESSENCE.com: What can we anticipate in this week’s episode of “Real Housewives of D.C.”? STACIE SCOTT TURNER: This week we’re going to Paul Wharton’s birthday party and we’re going to have a soulfood dinner at Aunt Francis’ house in Virginia. This one’s fun because you get a glimpse of my family and I believe you really get to know a person once you meet their family and see where they come from. I believe that the ladies also go horseback riding with the Salahi’s because Michaele gets a new horse.