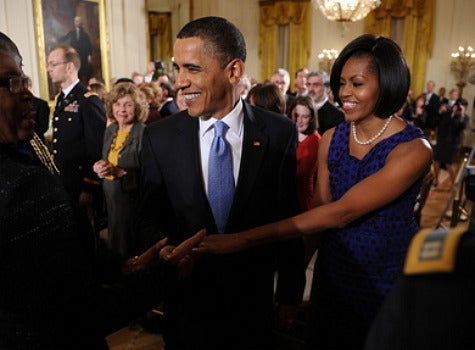 President Obama and First Lady Michelle Obama will make a guest appearance on an episode of “American Idol” airing next week. Let’s hope we’ll finally get to see the First Lady belt out a song by her favorite singer, Stevie Wonder. We kid. Their taped segment is a part of AI’s annual “Idol Gives Back” charity drive, which has raised more than $140 million in funds donated to organizations around the world. The Obama’s won’t be the first sitting President and First Lady to appear on “Idol Gives Back.” In 2007 President George W. Bush and Laura Bush also appeared, encouraging viewers to donate to charity. This year’s charity recipients include Save the Children US, Children’s Health Fund, Feeding America and Malaria No More. Alicia Keys and The Black Eyed Peas are also scheduled to appear on the star-studded episode. Read More: