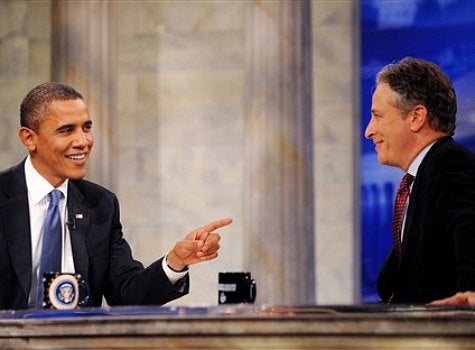 Seemingly poised and ready for the midterm elections, President Obama took to the “The Daily Show” with Jon Stewart for a candid (and often funny) conversation about everything from healthcare to the economy. The President is still trying to drum up the same youth support he had in ’08, and hopes Stewart’s viewers will deliver come November 2nd. Though they started off with lighthearted banter all jokes were put aside as the two got into a deep debate about jobs and the economy.

Asked what he thought of his low approval ratings, Obama responded that his advisors had warned him to “enjoy this now, because two years from now folks are going to be frustrated.” Stewart described many of this administration’s policies as “timid.” The president disagreed. “Jon, I love your show, but this is something where I have a profound disagreement with you,” he said. “This notion that healthcare was timid. This is what most people would say is as significant a piece of legislation as we have seen in this country’s history.” In the end, POTUS asked for one thing: “Can I just make a plug?” he said, “Just to vote.”