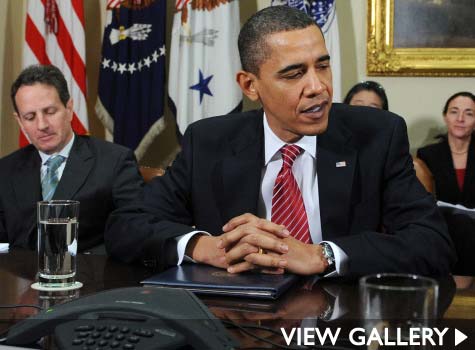 The Congressional Black Caucus is keeping the pressure on President Obama to do more about the disproportionate African-American unemployment rate. To make it easier for him, they’ve supplied ideas for how to do it.

In a letter to the President, the organization of African-American lawmakers outlined their priorities for job creation. “The Congressional Black Caucus remains committed to working with President Obama and our Congressional leadership to address the very real economic crisis gripping our nation,” said CBC Chair Barbara Lee at a Friday press conference, “And we will not shy away from the fight for targeted relief for those suffering the most in this economy.”

Some of the CBC’s proposals for the President include:

Although President Obama has, conversely, said that he wants to focus solely on the economic plight of the country as a whole, members of his administration have taken heed to the CBC’s concerns.

Transportation Secretary Ray LaHood, for example, has addressed the need for more Recovery Act dollars and infrastructure projects to reach minority workers and businesses. He recently pushed all 50 state governors to use proven apprenticeship and job training programs, as well as community partnerships, to ensure that stimulus funding goes to those who need it most.

“I believe it is vital that we work together to provide small disadvantaged businesses, and female and minority workers, a fair chance to participate in transportation projects,” LaHood wrote last week in a letter to governors, detailing specific steps for them to take. “I urge you to take advantage of existing equal opportunity programs and resources and to create innovative strategies to provide opportunities for the underrepresented.”

So, it looks like the CBC is starting to get some response to the alarm they’re sounding on Black unemployment. Do you agree with their ideas on the economy?
KEEP UP WITH THE PRESIDENT ON CYNTHIA GORDY’S “OBAMA WATCH” BLOG