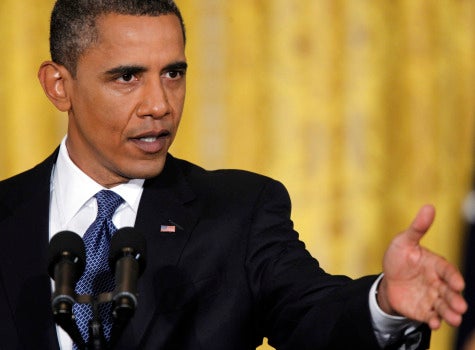 President Obama’s press conference today, coming just a few months before high-stakes midterm elections, was meant to focus on the economy. Yet with tomorrow’s September 11 anniversary, and a wave of anti-Muslim sentiment around the country, the conversation also touched on the planned Islamic center near Ground Zero, a possible Quran-burning preacher in Florida, and religious tolerance. Speaking on the November midterm elections, the President conceded that aggravated voters might not turn out for Democrats given the 9.6 percent unemployment rate. “For all the progress we’ve made, we’re not there yet, and that means that people are frustrated and angry. And since I’m the President and Democrats have controlled the House and the Senate, it’s understandable that people are saying, you know, ‘What have you done?'” he said. “What I’m going to remind the American people of is that the policies that we have put in place have moved us in the right direction.” He reminded us, for example, that the economy was losing nearly 750,000 jobs a month when he first took office, and most economists agree that without his administration’s policies–including cutting taxes for small businesses eight times over the past 18 months, and pumping billions into infrastructure projects–we’d actually be in much worse shape. Obama also pitched new economic proposals to give businesses additional tax credits, and to funnel $50 billion into highway, rail, airport and other infrastructure projects. And he called out a minority of Republican senators who are blocking the plan from going to a vote. “It’s time to stop playing games,” he said. Much of the President’s renewed economic push, however, has been overshadowed by media attention on Terry Jones, a pastor in Florida who’s considering burning a stack of Qurans on tomorrow’s anniversary of the September 11 attacks. Defense Secretary Robert Gates called Jones, whose church has only about 50 followers, to persuade him against the action. Jake Tapper of ABC News asked whether the President was concerned about elevating one individual nutjob on the fringe (not an exact quote, mind you). Obama said that burning anyone’s holy book is not only against American values, but it also threatens our military. “We are seeing today riots in Kabul, riots in Afghanistan, that threaten our young men and women in uniform,” he said. “And although this may be one individual in Florida, part of my concern is to make sure that we don’t start having a whole bunch of folks all across the country think this is the way to get attention.” He added, “I hardly think we’re the ones who elevated this story.” On the subject of building an Islamic cultural center a few blocks from Ground Zero–plans that the President has supported on the grounds of religious freedom, despite the tremendous controversy surrounding it–he reaffirmed his beliefs emphatically. Recognizing the millions of Muslim Americans, he underscored the error of conflating their religion with terrorism. “I’ve got Muslims who are fighting in Afghanistan in the uniform of the United States armed services,” he said, his voice rising. “And we’ve got to make sure that we are crystal-clear for our sakes and their sakes they are Americans and we honor their service. And part of honoring their service is making sure that they understand that we don’t differentiate between ‘them’ and ‘us.’ It’s just us.” For more of Cynthia Gordy‘s Obama Watch stories, click here.