The film, set in Brooklyn’s Nigerian community, follows Gurira’s character Adenike as she struggles with the pressures to produce an offspring for her new husband. Her mother-in-law, played brilliantly by Nigerian actress Bukky Ajayi, advises that she take another man. In this case, her husband’s brother. Intrigued and impressed, we spoke with Dosunmu about the premise of Mother of George, sex scenes in African films (they’re so rare) and exploring the secret lives of African women.

ESSENCE: Let’s just say I want to Nigerian after watching this film. The culture is put on display in such a beautiful way.
ANDREW DOSUNMU: For me it was more about that celebration of Africa. I’ve been in the culture, that’s something I know as a Yoruba and I really just wanted to show that. In cinema we’ve never really been depicted like that. That’s what got me into cinema really; to depict what I know that I’ve never seen. 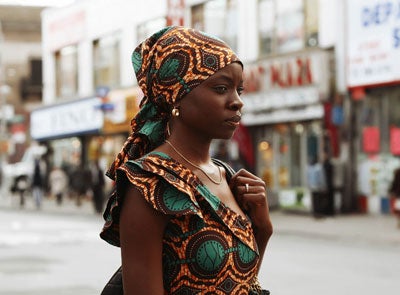 ESSENCE: The movie is called Mother of George. Why the name George of all names?
DOSUNMU: My screenwriter [Darci Picoult] heard a story from a woman from Zimbabwe. There was a summit at the United Nation where they brought women from different parts of the world and there was a judge from Zimbabwe who was talking about the kinds of situations that rural women sometimes run into. She told the story and she called it Mother George and so that’s the genesis of it. When [Darci] heard it she got this whole idea of setting it in New York. It resonated with me because I have so many relatives and there’s always gossip of this person being this person’s son.

ESSENCE: Your two leads are not Nigerian—Danai Gurira is Zimbabwean and Isaac de Bankole is from the Ivory Coast. Do you worry about Nigerians objecting to that?
DOSUNMU: I really believe that actors can transcend. It’s very important that I’m very truthful to the story. When an actor understands that world, they bring you something else. They bring you surprises. I wanted to be surprised and that’s why I wanted to work with these actors. I wanted that magic of cinema and I wanted them to surprise me.

ESSENCE: What do you love about Danai Gurira?
DOSUNMU: I worked with Danai on Restless City and I just think she’s an amazing and gifted actor. She questions things. And she’s a playwright herself. She also understands characters. She goes deep in there. It’s about loving that character and she really embodies that.

ESSENCE: There’s a lot of skin in this film. It’s refreshing because you don’t really see that side of Africans, in film.
DOSUNMU: Cinema hasn’t because we don’t reveal ourselves. The whole concept of covering up is an accidental idea for us. It’s accidental embarrassment. You go anywhere outside of the metropolitan cities of Africa and that’s what you see: people are very loose and I think when it comes to sexuality, it’s the most natural thing. We don’t see it as much because people shy away from it. I think our bodies together are beautiful.

ESSENCE: Actress Bukky Ajayi is amazing as the mother who convinces her daughter-in-law to do the unthinkable in order to get pregnant.
DOSUNMU: Yes, you understood her. Even though she could be harsh you understood her. You knew where she was coming from was love. What’s intriguing to me about what she presented to Danai’s character is that it showed that there have been solutions to problems since the beginning of time. Nowadays we go and get artificial insemination, yet for centuries we had solutions. Those solutions were probably a bit more organic because you knew where the baby was coming from.

ESSENCE: That part really reminded me of the secret lives of women; the little secrets that we don’t share with men.
DOSUNMU: What’s fascinating to me about that secret world is that it’s really about protecting the men. The women care for these men so much and they know that by [Isaac de Bankole’s character] knowing he’s the problem would reduce his manhood. It’s a shame and [Danai’s character] doesn’t want that so she will go to every length to protect him from knowing. That’s love. She’d rather do it under the pretext of something else because his brother is just a sperm donor, but her man is the man she wants to be with.