As my time as guest blogger on ESSENCE.com comes to an end I want to leave you with a very special epiphany I had about my dear friend Brandy.

My daughter Dia is turning 14 in a few weeks so I asked her what she wanted to do for her birthday. Her reply? “I want to see Brandy.” I said, ‘She lives down the street, we could go by her house right now.’ Her reply: ‘No, I’m not ready, I’m not in a cute outfit!’ As she continued to talk about Brandy, I started to sing “Mo-to-the-E to the: Moesha! Dia’s eyes got big as saucers and she yelled, ‘Wait, Brandy is Moesha?!’ This became a teaching moment.

The woman I call my friend is actually an icon. I think I missed it too because she doesn’t act like one. Down to earth, funny and approachable and the best ways to describe her. I took the opportunity to educate my daughter on Brandy’s contribution to entertainment. I told her that she is so much more than Chardonnay on BET’s The Game. When I was growing up Brandy was TV star, reality star, a pop star, a Cover girl, Grammy winner, had her own Brandy doll, and was the first African American to play Disney princess Cinderella. 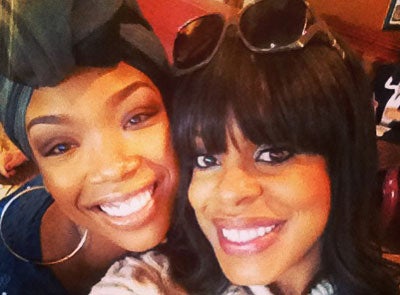 Most importantly she is a survivor. Many only judge and remember a person’s most recent failure. Brandy has had her share of headaches, heartaches, and public tragedies. The things she has faced like coming clean about the fabricated story about her marriage, being involved in a tragic accident where someone lost their life, and trying to manage her relationships with her family members would have crippled a lesser person. She has survived it all IN THE PUBLIC EYE! She has a resilient spirit that I would be blessed to duplicate. Thirty minutes later, my daughter said, ‘Wow mommy, I thought Brandy was just your friend’ My reply? ‘She is baby girl, it just so happens my friend is an icon.’