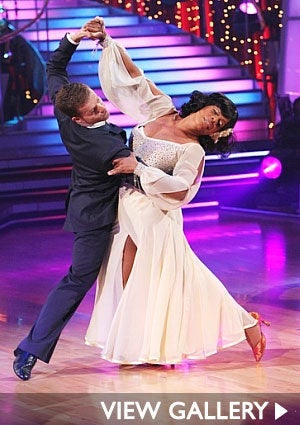 “Whew–I am tired! This past week has been a tough one, if I do say so myself. “I’ve been on the road, in Chicago, shooting new episodes of ‘Clean House,’ and as I’ve said before, there is no rest for the untrained. That means that rehearsals must continue. Our dance for Monday is the Rumba and I’m still trying to learn the routine. I’m actually on my way to the dance studio now to meet Louis. Thankfully, he’s here with me. “I thought the Rumba was going to give me a chance to shake a tail feather, but so far it hasn’t! At first, it sounded like it was going to be a fast dance, with a little ‘jump’ to it, but I’ve since learned that it’s yet another slow dance. We still have to be on our mark, though. The big difference with the judging for this dance is that we’ll receive two scores–one for technique and the other, for the overall performance. I’ve got to learn this dance! “I’m really starting to feel the pressure of this grind now. I’ve been working full-time days, plus doing ‘Dancing with the Stars.’ My call times for ‘Clean House’ are between 6 to 7am and I’m usually not done shooting until about 6 to 7:00pm. After that, I have to run off to rehearsals. Also, I’m still a mom and have been trying to discipline my children from thousands of miles away. In all honesty, I’d much rather be at home, but there’s not slowing down for me, not now. I’ll be doing this back-and-forth work routine for the next two weeks. Say a prayer for me! “After we finish up here in Chicago, Louis and I will be heading back to LA on Saturday for camera-blocking, plus I’m scheduled for the final fitting of my gown. At this point, I don’t know what it is I’ll be wearing. All I know is that it’s blue. “Trust me, if we can get this dance down by Monday, we’ll be doing big things! We hope you’ll be watching…and voting, too!” “Dancing with the Stars” airs tonight at 8pm, ET, on ABC. To vote for Niecy and Louis, call (800) 868-3405. Read more: