ESSENCE.com’s “New and Next” column spotlights the brightest new talents we think you should know. This week, we dig deep with rising R&B singer Avery Wilson.

Connecticut native Avery Wilson has “that thing” that captivates you from the first note. It’s not just his dynamic voice—it’s also that untouchable, nameless gift that leaves listeners speechless by the last chord.

We were first introduced to the now 20-year-old in 2012 as a contestant on season 3 of the hit NBC series The Voice, where he found a mentor in Cee-Lo Green before being eliminated from the competition. But he hasn’t let his exit from the show go in vain. At a photo shoot inside of a bright New York city studio, the 20-year-old commands the room with his bold personality and vibrant smile. As Travis Scott’s “Antidote” booms through speakers connected to his iPhone, Wilson easily vibes to the beat and plots his own future in music.

How would you describe your sound?

My sound is edgy, it’s definitely global, it’s international, it’s also still my generation too because I don’t want to get lost with that. I appreciate the Tory Lanez and the Bryson Tillers and their bringing a whole new essence and era to R&B that hasn’t been brought before because R&B is thought of as this old kind of sound, that rhythm and blues, barbecues and backyards. Now, it’s sort become more of like a hip thing that has a little bit more of our culture culture on it and I appreciate that. I try to add that into my music as well because I do have this big voice that people hear and I’m really thankful for that, I thank God that I have that voice but people hear that and they try to put me in a category like ‘oh, he’s just a crooner.’ As a singer, I’m not in a box, if that’s for you—if a box is for you that’s cool, but that’s not really what I do.

What is your creative process?

We go in the studio and we listen to a whole bunch of beats. Most of the time that’s where it starts, it starts with the beat because that’s an emotion. Music is all about emotion, so wherever the beat directs you that’s where you go. My music is all about real life about how we feel on the daily. I feel like a lot of music that doesn’t connect like we all turn up everyday and at the end of the day, we don’t. As humans, we don’t just turn up everyday. Some days we mad as hell at the world, some days we cool and we chillin’. Some days we just ight and that’s what I try to do, I try to bring that relationship—love and real life from a male perspective. It starts with the beat, we put the melody on top of that and then words just come through, they flow. 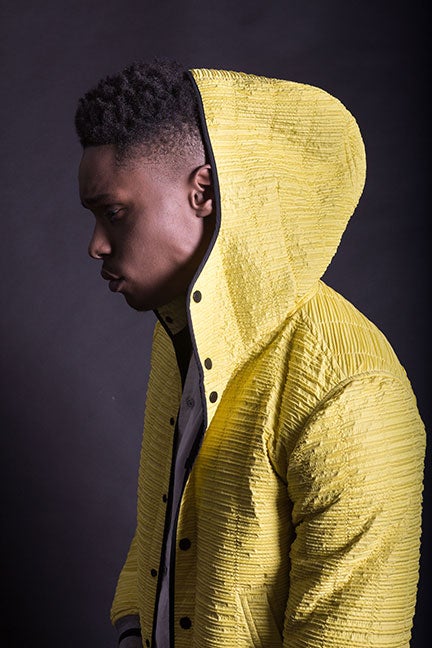 What story do you hope to convey with your music?

My story telling is a little bit of everything. I think that’s something that’s scared to be touched on by a lot of people. I think it’s really about being true to who you are and the essence of being an actual human being and going through the emotions of life everyday. It’s all about a balance. It’s about being real and honest and I feel like that’s what’s going to get people, being honest and true to myself.

You are on an island, you get to take five albums with you. What are they?

Number one, Thriller Michael Jackson, I mean clearly. Rihanna’s ANTI album, it is definitely coming on that island with me. I would have to take anything that’s N.E.R.D. with Pharrell. I connect to bodies of work and I’m so eclectic in my taste that it’s really music and songs that tap into how I feel. I’ll take a Maroon 5 album or I’ll take a Coldplay album. And I’ll take Songs in the Key of Life [by Stevie Wonder] because I feel every song there’s a moment for you to connect to.

What is the one thing you can’t wait to accomplish musically?

I want to bring back that whole aspect of The Voice because I feel like that’s the thing that people appreciate. It’s really not the wave, it’s not the move right now but you can never diminish the gift of someone’s natural actual talent and I feel like that’s something that people can connect to. When you give somebody passion whether it’s in a relationship, whether it’s in life, or you at your job and you give it to your boss, whoever it is, you’ll get respect. People respect real artistry and I want to bring that back because truthfully it’s coming back, it’s on the way but I want to be the one to capitalize.

What’s next for you?

I’m working on an album. It’s been a long, long time, for even the people who have followed me from Vine, on The Voice and all of that! They’ve been waiting and I always put it like this—when you’re a little kid and your mom’s in the kitchen or your dad’s in the kitchen cooking and you’re “dang, I’m hungry” and they say “go outside and play, go lay down,” that’s how I feel. Let me cook up this music and when I give it to you when I serve this up, it’s going to be so good that when you were waiting for it and you were hungry, now you’re going to be fed and you’re going to be full.