Miki Howard’s voice and musical influence endure the test of time. For proof, just tune in to the TVOne made-for television movie Love Under New Management: The Miki Howard Story, which premieres Sunday.

In no time, you will find yourself singing and humming some of Howard’s biggest hits including “Come Share My Love” and the title song, “Love Under New Management.”

As for the film itself, actress Teyonah Parris (Mad Men and Survivor’s Remorse) stars as Howard, first as the teenage daughter of gospel star Josephine Howard (played by Vanessa Bell Calloway) and later as a singer trying desperately to carve out a career. Personal and professional highs include topping the charts, starting a family, marriage and even dating her occasional duet partner Gerald Levert. Darius McCrary stars as Levert and does an amazing job capturing the late R&B singer’s mannerisms and style.

But Howard also faced a lot of adversity struggling with domestic abuse from her ex-husband, sexism within the industry and eventually a dangerous drug habit. But thanks to a top-notch rehabilitation program and the love of family and friends, Howard, 55, persevered. 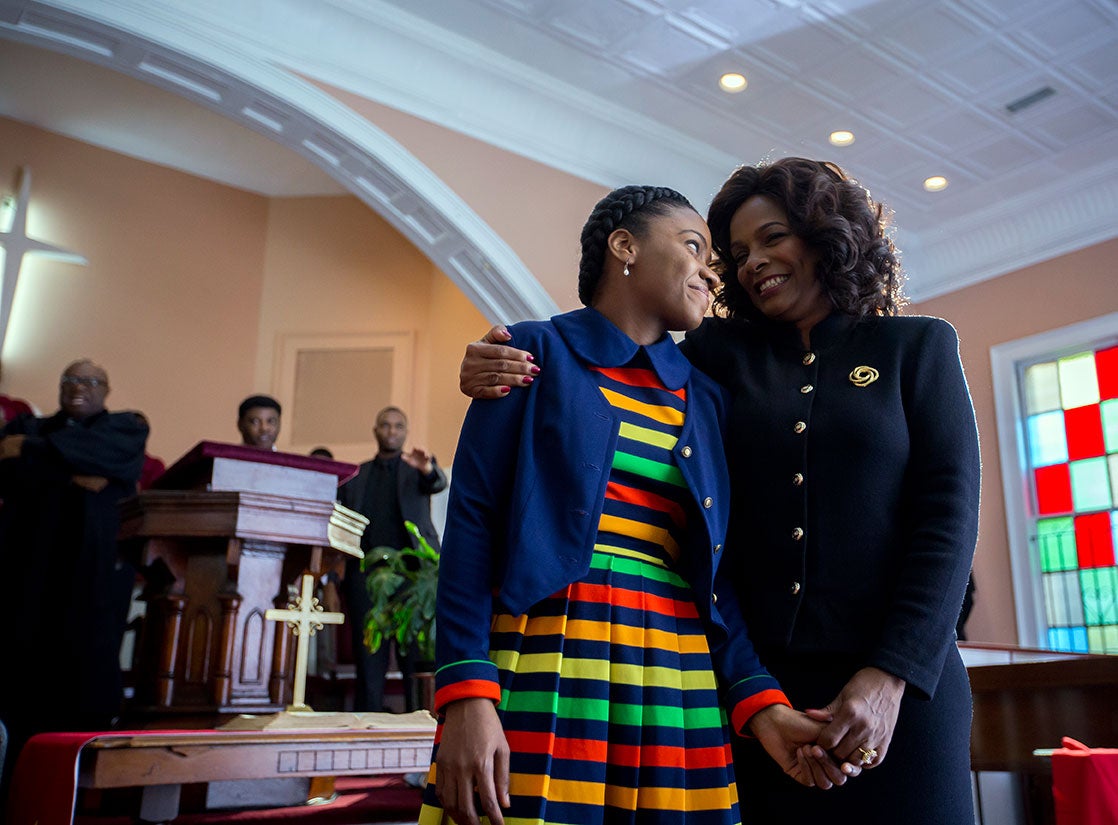 “I watch – don’t laugh – Love & Hip Hop and I see that the same stuff is going on that was going on when I was coming up in the business,” Howard says with a chuckle before getting serious about the point of her autobiographical film.

“I really hope that people who have been abused or who have struggled with drugs see this and see themselves,” she says. “If you want to know what happens to a lot of our Black celebrities, watch my movie. It’s the truth and it’s always good to tell the truth.”

Howard first shared her story on TV One’s award-winning biography series Unsung. The response to the 2011 installment was so positive, Howard decided to take it one step further with the film.

“That’s why I did it. TV One approached me and they had a beautiful director (Christine Swanson) and writers (Swanson and Rhonda F. Baraka) and I was ready,” Howard said. “I was totally flattered to have Teyonah play me. She did an amazing job and I was really happy about the choice to cast her. I was able to be involved in everything and she knew who I was and who I am and she had a wonderful affinity for me. She got to know me and did a great portrayal.”

Howard also chose McCrary to play Levert not only because he was capable but because the two men knew each other. Meanwhile, Chaka Khan, who is Howard’s good friend, is played by her daughter Indira Khan.

“Darius knew Gerald and looked up to him and is playing Gerald at the age he is now. He was so happy to do it,” she said. “We’re all old friends. Gerald was my friend even when we weren’t together romantically. I miss him. He was my work husband.”

Howard returned to headlines two years ago when her eldest son Brandon Howard said he was the illegitimate son of late King of Pop, Michael Jackson. This is uncomfortable territory for Howard, who considers herself a relatively private person, and she chose to leave the Jacksons and her son’s claims out of Love Under New Management. Howard has said in the past that her son is not Michael Jackson’s child.

“Young people get together and say this and that,” Howard says, adding that her son is a talented musician who is doing well in Paris. “But I’ve had a private relationship with the Jacksons since I was a young woman and they’ve been very wonderful to me and I would never say anything to start a conversation that absolutely doesn’t matter.”

More than anything, Howard said, her music is at the center of the movie just as it is in her own life.

“I did the music so that it would last forever,” says Howard. In the film, the singer’s career is compared to her then contemporary, the late Whitney Houston, but Howard feels like she’s more akin to her idols Aretha Franklin and Nancy Wilson.

“I never tried to make a hit record,” Howard says. “I only tried to make records that hit home and touched the heart. These themes are the same for millennials – love, hate, heartache, loneliness. It’s the same for all of us as human beings. I never had a trendy sound or a trendy record.”