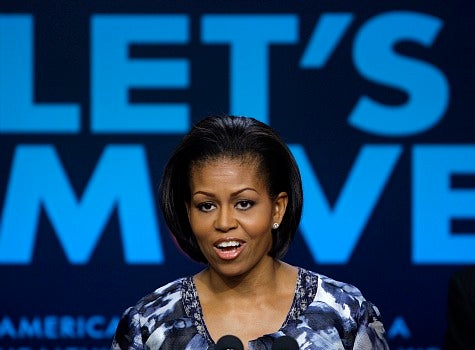 Michelle Obama continues to fight childhood obesity with her “Let’s Move” campaign. To celebrate the initiative’s one-year anniversary tomorrow, the First Lady will make a few media appearances in New York City on the “Today” show, and on “Live! With Regis and Kelly”…

Launched on February 9, 2010, the “Let’s Move” campaign is aimed at helping families make better food choices, increasing the accessibility and affordability of healthy foods, getting healthier foods to be served in our schools, and of course, increasing physical activity among the country’s youth.

Michelle Obama launched the campaign with an appearance on “Larry King Live.” “It’s really about the quality of life of our kids,” the First Lady explained to King.

Tomorrow will mark the First Lady’s first appearance on “Live!”