This story was originally published on PEOPLE.

LeBron James is ending 2016 on an impressive note.

This year alone, the Cleveland Cavaliers star pledged a $2.5 million donation to the Muhammad Ali exhibit at the recently opened Smithsonian National Museum of African American History and Culture in Washington, announced he’ll be the executive producer of an HBO documentary on Muhammad Ali, spoke out multiple times on gun violence and social justice and, on Monday night, accepted his second Sports Illustrated Sportsperson of the Year award (the only other athlete to do so is Tiger Woods).

“It’s never about the individual,” James, 31, said during his acceptance speech at the awards ceremony at Brooklyn’s Barclays Center. “It’s about the people behind him.”

The award was presented by rapper and friend Jay-Z, 47, who commended James for his “commitment to basketball” and for the way the athlete has “enriched the lives of everyone around him.” 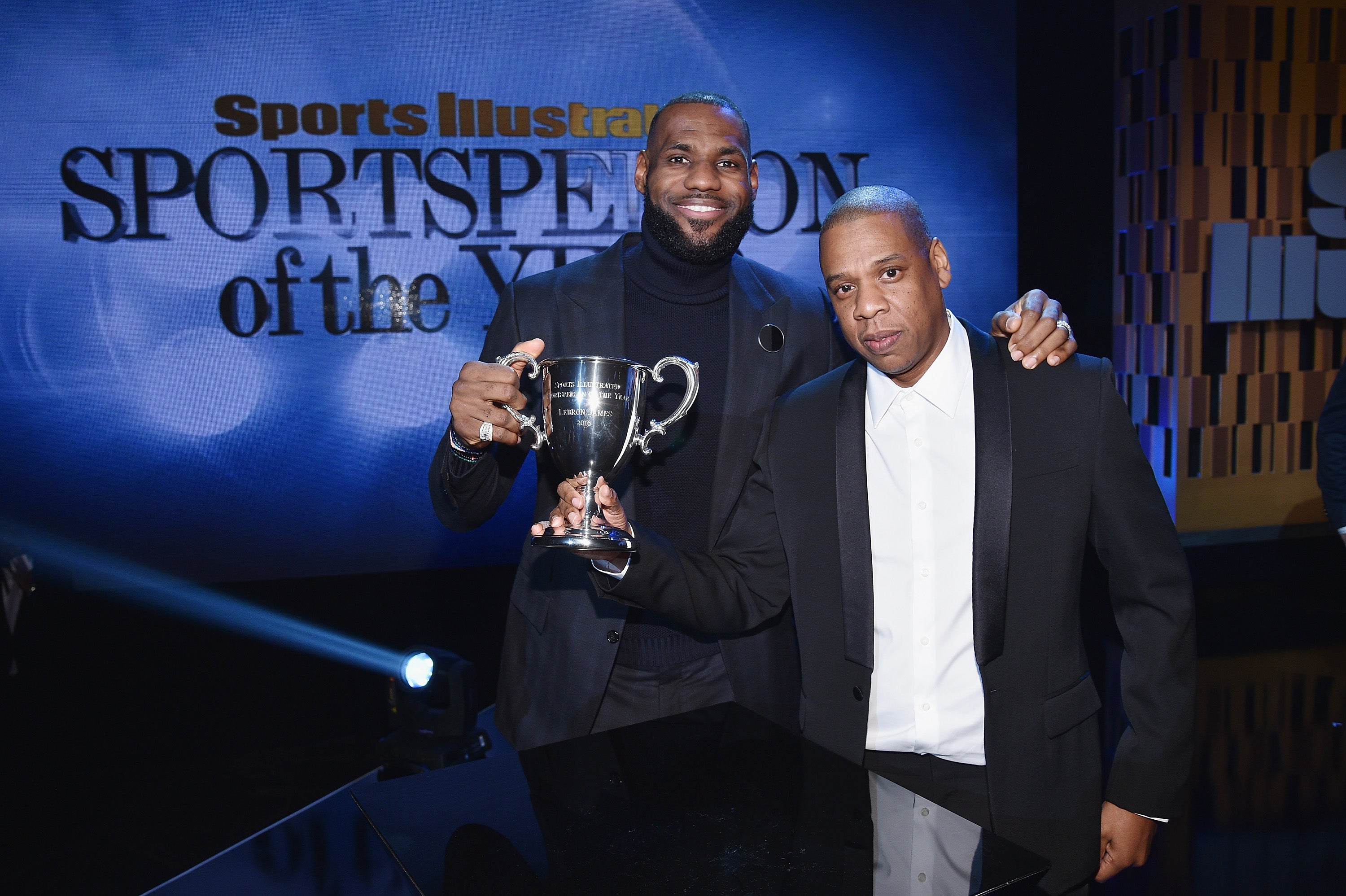 “LeBron James has made all of those around him better on and off the court. We acknowledge and recognize all he has done for the game,” he said. “Aside from the fierce competitor and the dominating basketball player who is LeBron James … The individual philanthropist, the man, LeBron James is even better than the basketball player. It’s hard to believe.”

Before the event, James told reporters he “almost” felt like he “wasn’t supposed” to be among the greats in attendance at the event — like legendary athletes Kareem Abdul-Jabbar, Jim Brown and Bill Russell, who all accepted the SI Muhammad Ali Legacy award. David Ortiz was also at the event, presenting the Rising Star title to Cleveland Indians shortstop Francisco Lindor.

DJ Khaled presented the Sportskid of the Year award and Kendrick Lamar stopped by for a surprise performance.

Also honored at the event was Michael Phelps, 31, who took home the award for greatest Olympian of all time. 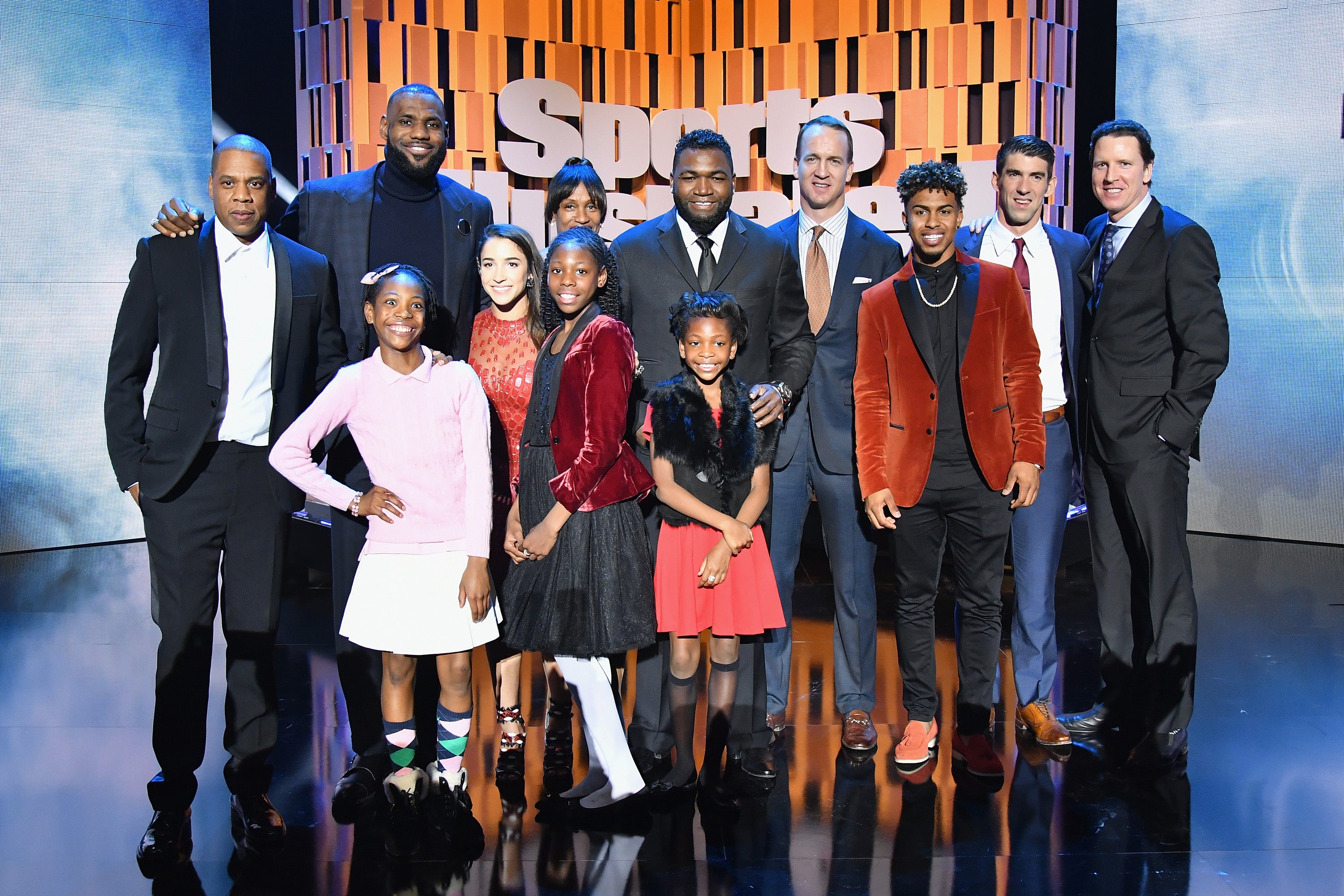 “I feel like I’m on top of the world,” Phelps, who walked the red carpet hand in hand with wife Nicole, said during his acceptance speech. “I was able to get married this year, have my first child. I literally feel like the luckiest man in the world.”

Olympic gymnast Aly Raisman, who revealed to PEOPLE that she has been dating NFL star Colton Underwood since the VMAs in August, presented the award to Phelps.

After the ceremony, the star-studded winners and presenters posed for a group photo on the Barclay’s stage, where James high-fived the SI Sportskid of the Year winners, Junior Olympian sisters Tai, Rainn and Brooke Sheppard, who live in a Brooklyn homeless shelter.

“Tai, Rainn and Brooke, I have a 2-year-old daughter at home right now and that’s all I can see right now while I’m watching you guys,” James said at the event. “You guys are incredible, just incredible.”