Singer, actress and reality star K. Michelle has made much of her life an open book over the last five years, but her latest journey is without a doubt the most personal one she’s shared to date.

As the ongoing conversation continues around women, age and fertility, recent health studies have shown that Black women generally have much lower success rates with conceiving through In vitro fertilization (IVF) relative to white women. K. Michelle hopes her experience with trying to conceive through IVF will help enforce the urgency in women over 30 having their fertility counts checked sooner than later.

Earlier this year, the mother of one revealed that she and her fiancé, Dr. Kastan Sims, were making plans to welcome their first children together —twins— by way of a surrogate. However, the couple has since switched gears and decided to move forward with IVF. ESSENCE caught up with the singer just before she started her IVF treatments this past Friday and she shared everything from how she arrived at her decision, to how it’s affected her relationship, to whether or not she plans to share her journey with fans on television, to her crucial advice for other women her age who are considering having children and much more.

What made you decide to switch from considering using a surrogate to moving forward with IVF?
Well, I’m kind of really on the fence still, but it started with the big lupus scare I had recently. I hadn’t been feeling well and when they ran the tests, it came back that I had lupus. Then they ran a full panel and it came back that I didn’t [have lupus]. They’re still trying to figure it out, they still don’t know why I’m not feeling well. I have to go back in four months to re-test.

You know, every woman wants to carry their kids but, the first doctor that I had was like, “I don’t know about [you carrying a child] with your schedule and downtime,” so we did find a surrogate. We actually have gotten another one, too, since then. So, we have about two waiting on us.

What information did your doctor share that helped lead you to this decision?
My fertility rate is very low and, my doctor even said that at my age, it shouldn’t be. Age 38 to 40 is when things normally start to kind of change with regard to women and fertility, but he also told me that more and more women are thinking that they have forever to have children and they have no clue. Maybe it’s the food we’re eating or something else going on making our fertility rates low but, a lot of us think we have until 30 or even 40 but the reality is that some of us don’t.

I was literally shocked when he told me. I was like, “I’m not a drug user or any of that, I don’t understand.” That’s when he told me that it doesn’t necessarily have anything to do with drugs nowadays, or even my scar tissue from having an abortion, because he sees so many cases where people haven’t had an abortion and they’re my age and they have the same issue. It’s just what’s going on.

You mentioned earlier in the year that you and your fiance were planning for twin girls. Is that still the case?
Yes. I’m doing genetic editing, which means I’m able to pick the gender of my child(ren). I chose to do genetic editing because I knew that I wanted girls and I knew I wanted twins. But with that decision, we’ll also be faced with the possibility of all the implanted eggs not taking to my body. So, a lot of times, people opt to have three eggs implanted, instead of only two, to increase the chances of at least having two take to your body in order to carry twins. They also give you the option of pulling one of the eggs out in the event that all three eggs end up taking but I really don’t believe in that. I just told my fiance, I said, “Looky here, if three take, well, we got three!”

Ideally, would you want to have the wedding first or have the babies first?
Well, we have basically been friends for like 18 or years 19 years now so, we’re just focused on the babies first and then planning out a wedding. The priority is the babies and getting these eggs out.

What were some of the things you’ve had to do so far in the beginning stages of the IVF process?
The drugs are so strong that you have to get a travel pass for them because they have to remain cool at all times. I have to take birth control; they call it ‘tricking the egg.’  We also have a list of all the vitamins I have to take, and then I’ve had to apply Androgel all over my body, which prepares for the egg removal once it’s time.

November the 25th is my egg retrieval and I’m just praying that I don’t have to do this process again.

What are some of your concerns going into this?
It’s very scary. I’m really terrified. I mean, I’m being real cool about it, but I really don’t want some random lady’s baby. I really don’t want that. And I want to carry. I couldn’t carry because I’m just so busy and because of unresolved health issues that they’re still trying to figure out but, nothing has changed in terms of the want still being there. So, I’m very nervous, but I’m glad I remained positive. This guy is the best in the game and he’s said he’s determined to get them. So I’m just hoping my body doesn’t have to go through, like, 3 attempts.

Were there things that you’ve learned that surprised you when you started preparing for the process?
I did not know that so many women are going through this. You know, people are in and out of [this doctor’s] office. My doctor, Dr. [Jeffery] Steinberg, is very, very high profile.  I won’t name names but, a lot of your favorite celebrities have come to see him. Whether it’s for twins or just help with fertility issues in general, there are a lot of women who just want kids, period, that I didn’t know about.

Also, it’s not anything that’s cheap. My medicine alone was about $10,000 and then to freeze the eggs is another fee. And then, to have them implanted in you and combine them to check your embryo, is an additional fee. Genetic testing also goes to about $80,000. 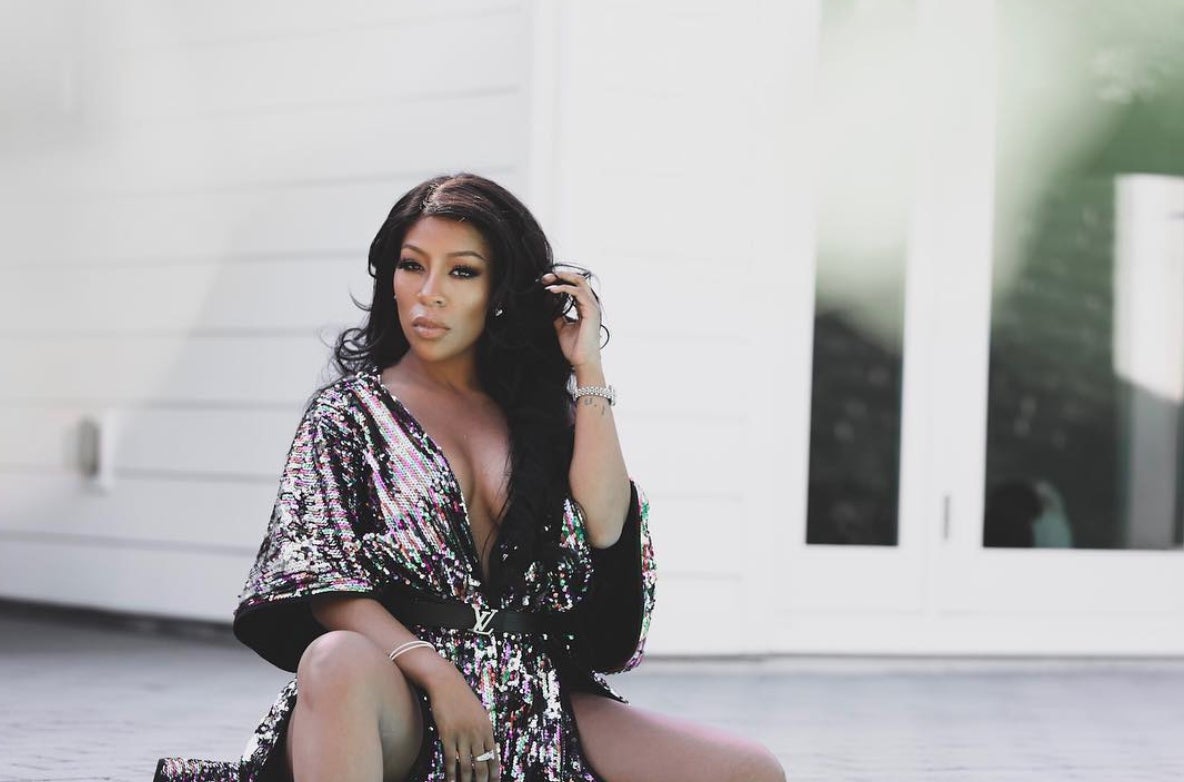 You mentioned that although you have your son, who is 14 now, your fiance doesn’t have any kids. How has he been throughout this process?
I was very upset when I found out about the fertility issues and it’s created a feeling of guilt in me because I have had an abortion and it was on TV for people to see. I had to ask God, “Am I being punished?”  So, there’s definitely been a lot of crying, screaming days with Kastan. It’s a lot and men don’t really understand how important it is to a woman to be able to conceive and carry naturally. They’ve offered us the option of a donor egg and I’m like, no, I don’t want a donor egg. I don’t want anybody else’s egg matched with his. Thankfully, though, he’s very supportive of all the different options and he’s much calmer than me.

You share so much publicly, but you seem to have made a conscious effort to keep your son out of the limelight. Do you plan to do the same for the twins once they are born? Or will you be sharing this journey with fans via televison?
Yes, I’ve never put my son on Love and Hip Hop. I never posted him on my Instagram page and I’ve protected him from the Internet, the heckling and all that kind of stuff. And when the babies are born, they probably won’t be seen much either. I’m not really with all that. People seem to believe that just because you don’t post it, it’s not happening, but it’s just my choice and my privacy.

But, yes, I am going back to TV. So, everything with the process for the babies, my wedding……you will get to see all of that on TV. People get to see a lot of my life but, I think this is something important. They’ve seen everything else, so, if they can see this and I can help, let’s do it.

What advice do you have for other young Black women based on your experiences on this journey so far?
I’m like, shouting at the top my of lungs, every African-American woman and woman that I know, you need to go and get this checked. When you hit 30, you need to check it just like you check for breast cancer. This is something that so many women have no clue about and it’s an issue. So, I’m definitely going to be talking to women and really pushing them to monitor it. If you have ever had that dream of being a mother —or even if you haven’t, because things change—you need to go and remove those eggs. I would tell any woman that is 33 like I am, you might want to look into that immediately. If you don’t have kids or if you want more kids, get it checked. At least check it to see what they’re saying. It’s as simple as an ultrasound. They can look at your follicle count and see what’s going on.