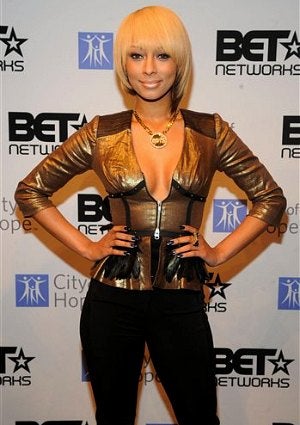 Keri Hilson’s latest video, “The Way You Love Me,” is no pretty girl rock. With more fully-loaded and lubed, gun-toting girls, it’s the music video that had us all clutching our pearls and blushing in disbelief. Hilson and her star-studded pleather panty posse pushed the envelope way past PG-13; but it wasn’t the over-sexualized imagery that had us shocked. It was Miss Keri’s role in it all. There before our very eyes our Atlanta good girl had gone bad. But did we miss the signs? We caught up with Keri before the release of her sophomore album “No Boys Allowed” to talk about letting go on “The Way…” on loving guns, and why Idris Elba may be the one exception to her No Boys Allowed rule… ESSENCE.com: You have been quoted as saying your forthcoming album’s title, “No Boys Allowed” means no BS. What do you mean? KERI HILSON: What separates boys from men is all the BS in between. So it kind of naturally happened that my music took on a girl-power tone. It’s a little more aggressive. ESSENCE.com: Is the sexy persona that we see in “The Way You Love Me” your alter ego? HILSON: The side that I would say is the alter ego is the more aggressive [side] — the more preachy side of me. It all comes from things I’ve been wanting to say. I think every woman is everything. We are strong sometimes, we are weak in other moments. I’m a prude at times and other times I have a dirty mouth. Women are so multi-faceted that I had to do an album that represented all those things. I’m a tomboy some days, other days I feel really girly. We are everything. ESSENCE.com: What was the inspiration for this uber sexy video? How did you feel while filming on set? HILSON: It was really fun. The video was based off of the movie “Domino,” and I play a female bounty hunter. It’s really hard edge but it’s a love story. I had a lot of fun. And I love guns. I shot a 12-gauge for my birthday. I love guns. I don’t own one yet but I probably will soon. ESSENCE.com: A lot of people were offended and shocked by the overt sexuality in the video. Were you surprised by the public’s response? HILSON: People are going to say stuff. When you put yourself out there in entertainment no matter how you do it people are going to have something to say. I guess I came to the understanding that I can’t please everybody. Even when I think I’m being safe I get scrutinized. So I might as well be who I am — go where the moment leads me so that I feel good about it at the end of the day. I loved the way it turned out. I felt free. ESSENCE.com: Is “The Way You Love Me” video who you are? HILSON: That video, that song is a part of me. It was free. I opened up that part of me. But people will take one thing and exploit it and blow it up so big. I’m learning that I am comfortable with however people take it. Just feel something. If we as women are not true to ourselves and our emotions and our feelings, then we are not being real. Those that were offended by that aren’t real with themselves. ESSENCE.com: People were also a little taken aback because we have never seen you in this capacity. Did we miss the “freak” persona before? HILSON: If you were paying attention to Keri in the little pockets of the universe that I’ve been a part of — like my feature with R.Kelly, my feature with Trey Songz, I say some things. I think maybe it’s different when you’re saying it on a whole song. But when you hear those verses you’ll think she’s been revealing that side of her. Maybe not as aggressive as I did for myself. ESSENCE.com: Speaking of all this sexuality, are you dating? HILSON: I have to be honest, I feel like the new kid at school. All the guys are waiting for the opportunity to pounce on the new girl. They approach me as such. ESSENCE.com: Is it true that you won’t date rappers? HILSON: It’s not just rappers, but entertainers and athletes in general. In my experience with them I don’t think that it’s genuine. I almost feel like it’s just to up their status. And I might be a little more than you bargained for because I want something real. I’m dating [now], but you wouldn’t know because you haven’t seen me out there for real with anybody. I’ve been allegedly dating lots of people that I just shot a video with. But you’ve never seen paparazzi pics of me for a reason. I want something real. I’m not saying that I can’t find that in an entertainer or someone who does what I do but I just think that it’s probably just not the ones that I’ve met — the ones that have approached me in that way. ESSENCE.com: Is there one you would make an exception to the rule for? HILSON: Maybe an actor. I love [Idris Elba]. I do think he’s incredible. He’s a tall chocolate man. I love chocolate. If I had to choose one, it would be him. ESSENCE.com: So your sophomore album is out soon. Are you excited? HILSON: Yes, “No Boys Allowed” comes out December 21st. And I can’t wait. I’m very excited. Join Keri HIlson as she counts down the days until her new album “No Boys Allowed” is released.