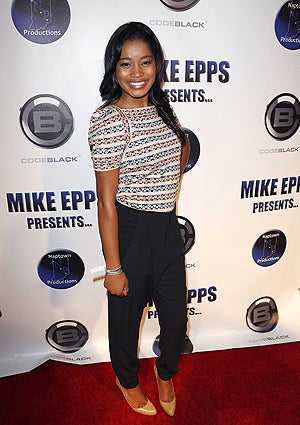 While Miley Cyrus might be a household name, teen actress Keke Palmer is quietly building an entertainment empire. The Chicago native began acting at 9 years old following an audition for the off-Broadway run of “The Lion King” and now boasts films like “Akeelah and The Bee.” Her current Nickelodeon show, “True Jackson, V.P.,” where a teen, played by Palmer, becomes vice president at a billion dollar fashion company, pulled in over 5 million viewers for its second season debut. Palmer also has a companion clothing line, Mad Styles by True Jackson, that was so popular the line sold out of its exclusive retailer, Wal-Mart. In addition, Palmer is a singer signed to Interscope records, where she’s prepping her second album. Her first LP “So Uncool” dropped in 2007. Now Palmer’s preparing for the release of her made-for-TV-movie “True Goes To Paris,” airing on Nickelodeon at 8pm/7c on May 22.   The teen took a break from filming to chat with ESSENCE.com about acting, why she’s no “Hollywood kid” and taking over the world.   ESSENCE.com: Congratulations on all of your success! After filming movies with Laurence Fishburne and Kevin Spacey, you’re about to release a new made-for-TV film for your series “True Jackson VP,” how does it feel? KEKE PALMER: I love it and I’m really excited. I can’t wait for all of the kids to see it. We filmed it like a real film, although we did it all in a studio here in Los Angeles. It’s very action-packed and has a lot of funny scenes.   ESSENCE.com: Do you do your own stunts?   PALMER: Yes, I do! We have a scene in this cargo thing and I get tossed around. I laughed a million times, so we kept having to reshoot. In another scene, my best friend on the show, Ryan, has to bust through this wall. I had a fun time.   ESSENCE.com: Your little brother, Laurence, is also in “True Goes To Paris”? PALMER: Yes, he’s 9. We call him “thinker,” that’s been his nickname since he’s little because he always looked like he was thinking. My brother doesn’t like trying out for roles, he just likes getting parts. For the “True” role, there was a part for a little boy and the casting director asked him if he wanted to do it and he said yes.   ESSENCE.com: In 2005, you were nominated by the Screen Actor’s Guild for an Outstanding Performance by a Female Actor award. Were you aware of the honor you’d received at the time? PALMER: I wasn’t reall,y because I was so young, I was 11 years old and I didn’t understand how special that was to be nominated by your peers because your peers thought well enough of you to say that you’re talented. I wish that would happen to me now!   ESSENCE.com: Who are your favorite actresses? PALMER: Cicely Tyson, I love Angela Bassett and I like Kimberly Ellis’ acting. I also love Whoopi Goldberg, because she gets parts that aren’t necessarily written for her. Like her role in “Sister Act” or in “Ghost,” neither of those were written for her but she’s so good she got them.   ESSENCE.com: Do you consider yourself a “Hollywood kid”? PALMER: No, not at all. I just live my life. I don’t think about being famous because I don’t really go out. When I am out and people ask me “are you famous?” I don’t like answering, I don’t want to mention my job. I guess people know me, but not everyone so I don’t want to be out there looking like a fool.   ESSENCE.com: As a 16-year-old, is it difficult to balance your career and school work?  PALMER: No, I took the California High School Proficiency Exam and so I’ll be finished with high school this June. I’ve been home-schooled since the fifth grade, so I try to relate to other kids as much as I can.   ESSENCE.com: Do you ever feel like you don’t have time to be a kid? PALMER: Sometimes I feel like I wish I could do more things like kids my own age, but there’s probably someone out there that wishes they could do what I do but can’t because their parents won’t take the risk.   ESSENCE.com: How’s your new album coming?   PALMER: I just finished my album and my manager and I are meeting with Interscope soon to pick the first single and discuss when everything will be released.   ESSENCE.com: Do you enjoy acting or singing more, or both equally? Where would you like your career to be ultimately?   PALMER: I want to be full throttle! I want to do everything that no one has ever seen, I want to do lots of movies and then have a number one album! I want to change the world, and prove that you can do it all.
TOPICS:  Keke Palmer