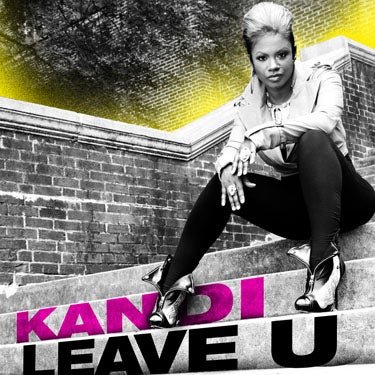 Nestled in an apartment in Atlanta’s Four Seasons, “Real Housewives of Atlanta‘s Kandi Burruss, dressed in a leopard print mini dress, is relaxing on a bed while preparing to shoot the next frame of her video for “Leave U.” After closing down the video’s first set-up, ESSENCE.com chatted with Kandi Burruss, the former member of Xscape, about her new album “Kandi Koated,” and what we can expect from her vocally… ESSENCE.com: A line in “Leave U” says ‘Pick up my mama up from Sunday school, you used to do it.’ We think that’s our favorite… KANDI BURRUSS: Honestly, I can’t take credit for that line. I co-wrote “Leave U” with Vawn, and he’s one of the men in the video, Pooch [Hall] is the other. He and Gas, we wrote the song together and Jazze Pha produced the song. If you’re a songwriter, people automatically think you wouldn’t want to collaborate but I’m not like that. ESSENCE.com: What do you hope to create with this album? BURRUSS: I really wanted to make an album that put me in the mood of when I was with Xscape, but up to-date. Xscape had all kinds of records that people could relate to and big love songs people could make babies to, so that’s what I wanted to do with my album. You can follow it like a relationship. You meet the person, you fall in love, you get mad at the person, after you break up with them, you’re missing them. Then you want to sneak back and get a little taste… it takes you back to those moments. Then there are inspirational tracks like “Fly Above” and “Superwoman,” a collaboration with Tiny [Cottle] and I. It’s about being a single mother and a strong woman for your kids. On this album, I wanted to come with it vocally. Some people are like ‘I don’t know if she could sing…’so I decided to go all out vocally. So I’ve shown every part of my range, from the super highs to the deep low notes. I’ve grown a lot vocally so I want to show that ESSENCE.com: How did you sign with Warner Music Group, specifically Asylum records? BURRUSS: Last year, everyone saw me trying to get my music together and get a new deal. At first, I was in talks with Capitol but things didn’t work out so I said ‘I’ll just do it myself independently.’ So I’d begun investing in my own project through Kandi Koated Entertainment, my company which I’ve had for almost 10 years. I started working with different producers and made “Fly Above” and released it on iTunes. It was the no. 1 R&B album on iTunes for that week, even though there were artists from major labels on the chart as well. That said a lot, and Warner saw that I was able to do it on my own and have an audience to buy the record without any major push. We finished the paperwork last December. Kandi’s single “Leave U” is available on iTunes.