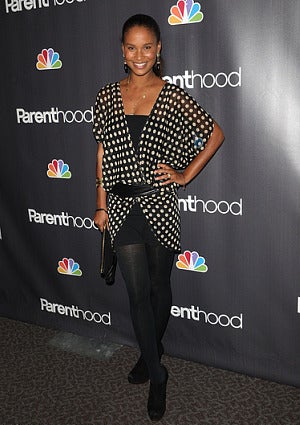 Actress Joy Bryant is no one’s mother in real life, but so far she’s had three roles as a mom. “I’m like, ‘Is this the universe trying to tell me that I need to get myself together and hunker down and have a kid?” she says of her latest role in the NBC drama “Parenthood,” tonight. The series is a remake of the 1989 movie of the same name. In it, Bryant portrays Jasmine Trussell, a single mom who moves back home to pursue a dance career. In between takes of the new TV show, she spoke to ESSENCE.com about switching from the big screen to the small screen, and being a real mom to her dog Bubba. ESSENCE.com: What motivated you to go from the big screen to the small screen? JOY BRYANT: I’ve always said that if anything–whether it was film or television–was something I responded to, then I was open to it. For years there have been TV projects that I just didn’t think I fit in and then this came along and it was the perfect equation. It has great writers and an amazing assembly of actors so it was kind of a no-brainer to want to be a part of it. And then when I saw the kid that’s playing my son I was like, ‘Oh my God, he’s so cute I have to be his TV mommy.’ ESSENCE.com: How did you prepare for the role of playing Jasmine, a single mother? BRYANT: I come from a single mother, not to say that’s enough experience, but my grandmother raised me and I know plenty of single mothers. I don’t have children of my own so I can’t say I know the plight of being a parent but I can kinda understand some of the complexities of it. And, I’ve played a single mom in “Get Rich or Die Tryin’.” I hope women feel I’m doing the single mom justice. ESSENCE.com: What about the character resonated with you? BRYANT: I grew up not really having a connection to my father so I think on that level I can really relate to the character in terms of not wanting her child to go through what she went through. I relate on the level of wanting your child to be balanced and have a relationship with the other parent, especially a father. ESSENCE.com: Jasmine has a child with a White character. Does the issue of raising a bi-racial child come up in the show? BRYANT: It comes up but not in the way you think it will. It’s not like race is totally ignored but we don’t beat it over the head because at the end of the day Jasmine had a baby and the father needs to deal with it. I think it’s kind of great they’re not stressing that she’s Black and he’s White. ESSENCE.com: In a way it’s also refreshing to see that the Black character is not the only single mother on the show. BRYANT: Right, we show that being a single mom happens to everyone, regardless of race. As long as the character is being portrayed in a positive way that is not stereotypical or demeaning, I’m cool with it. ESSENCE.com: So Miss Joy, you’ve played a few roles where you’re a mom. Has it rubbed off on you at all? BRYANT: It’s weird because this is the third thing I’ve done where I’m either a mom or the whole parent thing is in my story line, and I’m like, ‘Is this the universe trying to tell me that I need to get myself together and hunker down and have a kid?’ I don’t know, it might be a sign, but I got married two years ago and I’m still enjoying being with my husband and us having the life that we have. I’m not really in a rush to have a baby yet, but there’s so much outside pressure. People hear how old you are and they’re like, ‘Oh, you don’t have that much time.’ If it gets to the point where I actually physically cannot have a child there’s plenty of children in the world that need a stable home and loving parent. I’m so down for adoption. ESSENCE.com: Well, you are a mom to Bubba, your dog. How is he? BRYANT: He’s cute and loves to snuggle and cuddle, but he’s totally crazy. I think he has OCD and he’s very needy, I love it. Catch Joy Bryant on the new NBC drama “Parenthood,” premiering Tuesday, March 2nd. Read More: