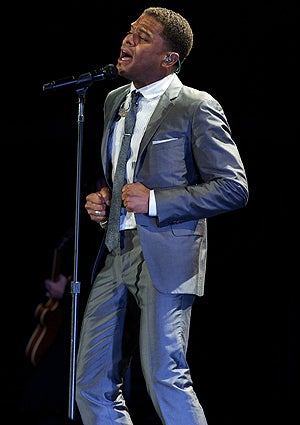 “Hi Bay Area!” said Jill Scott to the Oakland, California audience of mothers and daughters, couples and lovers, and girlfriends on a night out.   The singer/songwriter/actress opened for Maxwell during the pair’s North American tour and ESSENCE.com caught the duo’s show at the Oracle Arena on Friday, June 4.   Opening with her famous pipes, Jill’s outfit rang louder than her music. Showing off her increasing svelte frame, the Philly-bred songstress sported a v-neck gold lame dress with a tiered ruffle skirt, cinched waist, black leggings and sparkly booties. We love Jill and embrace her sense of style, even when she does appear to have plucked her costume from Evilene in the “The Wiz.”   Backed by an eight-piece band, three male background singers and two silhouetted dancers on either side of the stage, Jill ran through hits like “It’s Love,” and the self-pleasuring “Cross My Mind.” However, it was her introduction of new tracks from her forthcoming album “Light of the Sun,” which is slated to hit shelves later this year, that were most exciting.   “This is for everyone that loved someone and messed it up,” she said of the first song. “There ain’t nothing you can say, you’re just stuck, so I wrote this. It didn’t help me, but maybe it’ll help someone else.” With that, she burst into her song whose chorus repeated “Love You” as Jill tried to convince her significant other to stay over light drums and equally light running piano chords. “I was a sucka, I love you I know you could see it,” she sang. The second “Light of the Sun” track, titled “Hear My Call,” was inspired by a “dark time” the singer said and nearly brought the audience to tears with its acoustic composition, featuring only a piano, and searing lyrics written directly to a higher power. “I am so unsure of my perception, what I thought I knew I don’t seem to, where’s the turn so I can get back,” she sang. “Love has turned me cold, I need your healing, please.”   Maxwell followed Jill with his signature high energy style wearing a suit that rivaled Marvin Gaye in his early Motown days. He began with medleys from “Urban Hang Suite” and “Embrya,” which led the Brooklyn native into his current “Blacksummers’ Night” LP with a rousing rendition of “Cold” remixed to horn-driven beat that borrowed from HBO’s new New Orleans show about the post-Katrina Jazz scene, “Trem.”   Between changing his shirt at least four times — Max wore himself and the shirts out — and asking the audience if he could “be your baby daddy” to thunderous screams, Oakland ate his performance up. From “SumthinSumthin” to “Stop The World,” the singer, flanked by a seven-piece band and one background singer, took the Bay Area through his latest work with a flawless falsetto. He even threw in a cover of the Isley Brothers’ “Don’t Say Goodnight (It’s Time for Love)” and Al Green’s “Simply Beautiful,” a song which marked his reemergence onto the R&B scene in 2008 and we’re thrilled he’s back.