I met Natalie Cole when I was about 11 or 12 years old backstage at one of her shows. My aunt brought me to the show and talked her way backstage in order to introduce me. I was extremely shy and nervous, but Natalie welcomed us with open arms.

Farewell, Natalie: A Look Back at an Unforgettable Life

My aunt explained that I was a drumming prodigy that she needed to know. Natalie smiled and said she looked forward to hearing me and hoped we would get to play together one day. We eventually did. I remember this day clearly—her warmth toward me and everyone else backstage, including some of Dick Gregory’s children, one of whom later became one of my very close friends. This was the first major R&B concert I had ever attended and it left a lasting impression. Thanks to her, and Diana Ross, I too wanted to be a star. 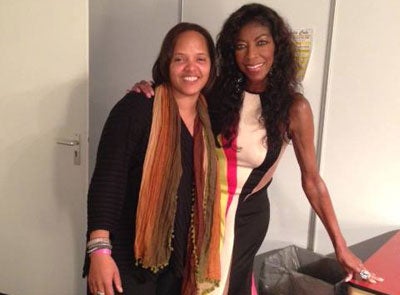 Of course her being the daughter of one of the greatest song stylists and pianist in the jazz/pop idiom is noteworthy, but it would not have mattered who her father was because she was great on her own. She had a superior instrument and was a “musician” with her voice. Her unique blend of R&B, jazz, rock, pop and gospel created an original sound that was appreciated and celebrated globally.  She was a singer’s singer for sure—respected by everyone.

Natalie was one of the first major artists of her caliber to have a female musical director, first with Aziza Miller (formerly Linda Williams) and then with Gail Deadrick. It was significant to me and other women to see female musicians in this kind of leadership role on stage. It meant that our goals as songwriters, composers, conductors and musical directors in the mainstream were not so farfetched.

Natalie always wanted to keep evolving, to keep reinventing herself. I saw her in New York a few months ago and she told me that she wanted her next project to be a country/blues CD. I was looking forward to hearing this, as I saw in her once again the desire and ability to add yet another genre to her arsenal.

She was a perfectionist with her craft and graciously shared her gift. Her recording on my current release—The Mosaic Project: LOVE and SOUL—was a career highlight for me. She called me before the session to say she wasn’t feeling well, but was on her way. When she arrived, she had a very bad cold and I joked with her that Jesus, Allah, Buddha and all the rest were on our side and that this session would be great nonetheless.  And it was. She sang like an angel, without notice of her terrible cold. I thought to myself, what a blessing for her to be so connected to her inner voice, her authentic voice,  that the outer voice can’t even get in the way or stop her from sharing herself. She even came back to the studio a second time to be interviewed for my EPK. We shared many laughs, and she often told me to rest and take care of myself—words of wisdom that I will heed. I feel fortunate to have experienced her firsthand. She was a true legend that will always be with us. Her contributions to music are remarkable and I am thankful for them and for her.

Terri Lyne Carrington is a three-time GRAMMY® Award-winning international recording artist, multi-genre producer and composer.  She is the Zildjian Chair in Jazz Performance at the Berklee College of Music Global Jazz Institute.