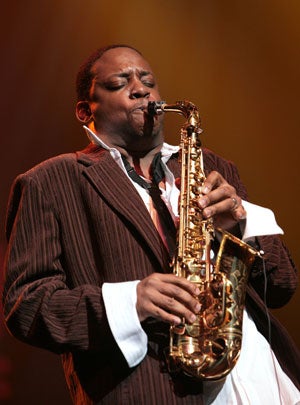 Saxophonist Jackiem Joyner is the new “It” boy. Touting three albums and two number one singles, the Virginia-born, New York-raised musician is playing his way to the top. The city of Syracuse even declared August 5th Jackiem Joyner Day and presented him with a key to the city. On the personal side, Joyner, who was raised by his mother, reunited with his estranged father and two older sisters several months ago after 24 years apart. Joyner chatted with ESSENCE.com about his new self-titled album, the key to a happy marriage and how his family has inspired him. ESSENCE.com: Where did you begin your career? JOYNER: Once I met my wife, we got married and moved to Los Angeles in 2004 where my music career really started. My second album was called “Lil Man Soul,” which came out in 2009, earning two number one songs. “I’m Waiting For You” was my first number one single and it was nominated for an American Smooth Jazz Music Award for Best Song of the Year. My second number one single, “Take Me There,” put me on the map. ESSENCE.com: After releasing two previous albums, 2007’s “Baby Soul” and 2009’s “Lil Man Soul,” why did you decide to make this album self-titled? JOYNER: I was always the youngest guy in any band I joined and I always had nicknames like Baby Soul or Lil Man Soul, so I wanted the third record to be about me and get people to recognize my name in the industry. ESSENCE.com: You recently reconnected with your father and two older sisters after 24 years apart, tell us about that experience. JOYNER: It inspired me to write a hard track called “The Reunion,” which has this drumline that’s like a marching band. It displays a happy time for me. I went back to the east coast to spend time with father and sisters, so that really pushed completion of my new album. I was already about eight songs in, and after meeting them, I was moved to do “The Reunion” and another track called “Back Together Again.” ESSENCE.com: How did you lose touch with them in the first place? JOYNER: My parents divorced when I was six or seven years old, then my mother and I moved out of Virginia and communication was gone. ESSENCE.com: How did your father’s absence affect your view of marriage? JOYNER: I got married at 23 years old, so I heard it from all of the older cats like ‘why are you getting married so young?’ But marriage is all about sacrifice; if you can respect someone for his or her differences then maybe it’ll last longer. My marriage is working out and we’re going on seven years. ESSENCE.com: As a composer, have you written any songs for your wife? JOYNER: Yes, her name is Lola, so I wrote a song called “Lola” for her. It has a Latin feel to it, not that she’s Latin. ESSENCE.com: Why’d you choose to play the saxophone? JOYNER: The strange thing is, in high school I wanted to play the drums. But my music teacher in Syracuse said we had enough drums but we did need a saxophonist. When I looked at the saxophone, it had so many buttons that I saw the instrument as a challenge — and I love a challenge. ESSENCE.com: The sax is a pretty sexy instrument; do you have to beat off groupies? JOYNER: Yeah, someone just wrote something on my Facebook page, ‘If anything happens with your wife…’ You always have that. I’m glad I didn’t pick up the drums, they’re cool but the sax sounds more like a voice, if you know what you’re doing. ESSENCE.com: You recorded Michael Jackson’s “Off The Wall” for this album, why? JOYNER: I wanted to make sure I put some Michael on this album and I pictured myself playing different songs and I kept coming back to “Off The Wall.” ESSENCE.com: Give us one song from the “Jackiem Joyner” LP that we must hear. JOYNER: You need to listen to “The Reunion,” it really reflects my style and sound. When people hear it, they’ll think ‘Wow, that’s different.’ It kind of reminds you of the film “Drumline” actually, “The Reunion” is very cool.