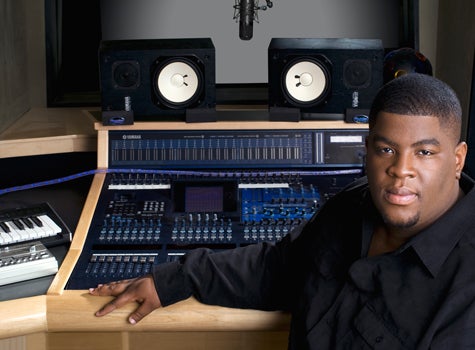 Can you feel the energy? We sure can! In just two days, we’ll all get our long-awaited dose of “Sex and the City 2” and if producer extraordinaire, Salaam Remi, has his way, we’ll be just as entranced with the music as we are with the drama unfolding on the big screen. Led by Alicia’s uber-sexy remake of Blondie’s “Rapture,” the ever-fitting, fun & flirty soundtrack album is chock full of hits, much like Remi’s discography. During a career that spans nearly two decades, the Queens-bred producer has struck gold and platinum with the likes of Nas, Jennifer Hudson, Jazmine Sullivan and Fergie as well as Amy Winehouse, Sean Paul, The Fugees and Shabba Ranks. Now that he’s got both “Sex and the City” soundtracks under his belt, there’s no doubt that more film work will soon be on his horizon. ESSENCE.com caught up with Remi during some rare downtime in his Miami studio. Between bites of brown-rice sushi (and with an episode of “Good Times” muted in the background), he filled us in about his process, which legend he’s most proud to have worked with and what he’s got brewing next. And though we tried, he wouldn’t give up any goods about the film — damn, damn, damn! ESSENCE.com: Congrats on your role as Executive Music Producer of the soundtrack and the film. We’re loving Alicia’s rendition of “Rapture” and Liza doing “Single Ladies” is beyond brilliant! SALAAM REMI: Thank you. Alicia’s song was one of my biggest challenges, actually. Once everybody sees the film, they’ll understand how and where it fits, but I spent a lot of time trying to find a song that tied everything together and captured that feeling of girls, of all ages, having a night out and just having a good time. Alicia rapped for the first time on that song, so it was fun to get her to try something different.

Working with Liza Minnelli was definitely something special. Not many people of my generation can say that they’ve done that… or ever will. ESSENCE.com: OK, OK, let’s talk about the film! REMI: Well, I don’t want to spoil any surprises for anybody. I’d never, ever do that. ESSENCE.com: But, we haven’t even asked you anything yet… like, how are Carrie and Big doing? REMI: [dead silence] ESSENCE.com: How about Miranda and Steve? Charlotte and Harry? Samantha?! REMI: [laughs] ESSENCE.com: Hmmm, OK…well, can you tell us who your favorite “Sex and the City” gal is? REMI: Awww, I can’t choose. I heart them all! [laughs] ESSENCE.com: So, what’s next for you? REMI: I’d love to do more films. I’m also in the midst of finishing Amy Winehouse’s album and I’m still knee-deep in the Nelly Furtado album. There are a lot of up-and-coming artists that I’m working with, too, like Jazmine Sullivan. Her new album is coming out great. ESSENCE.com: Who’s playing in your iPod? REMI: I like music that I can listen to on the plane; that lets me zone out a bit. I’ve been listening to Corinne Bailey Rae’s new album, “The Sea,” and I especially like the song, “Feels Like the First Time.” I really love my Stevie Wonder playlist, too! ESSENCE.com: So, what keeps you motivated? REMI: For me, it’s about being able to switch between genres. I love working with new artists and finding out what their motivations and passions are… that way, we can try to discover things, together.