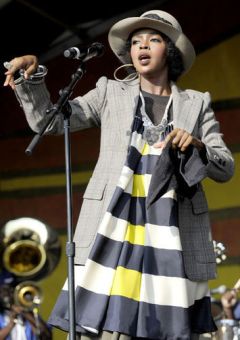 Today, Lauryn Hill, the talented actress, singer, and musician turns 36 years old. Lauryn is a trendsetter and musical genuius, so we are excited to blow out candles on her special day!

Lauryn launched her solo career in 1998 with her iconic album “The Miseducation of Lauryn Hill.” Her debut LP shot to the top of the charts and earned the singer a record-breaking five Grammy Awards, including the coveted Album of the Year and Best New Artist.

In addition to being a talented musician, Lauryn is also a mother of 5 and wife to Rohan Marley, the son of reggae artist Bob Marley.

Lauryn is set to headline the Rock the Bells festival this year alongside Nas in San Bernardino, California, on August 20.  The four-city event will feature Lauryn performing her entire album, “The Miseducation of Lauryn Hill.”