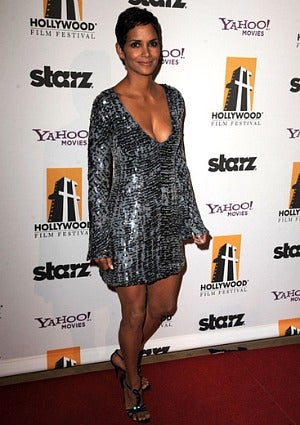 Halle Berry isn’t waiting until next year to see if her upcoming indie project “Frankie and Alice” will win her another Oscar. The film will be released in New York and Los Angeles on December 17, so it can be considered for Oscar 2011 glory. If Berry, who produced the flick, gets nominated for Best Actress, she’ll likely be up against Annette Bening, Julianne Moore, Diane Lane, Hillary Swank, Anne Hathaway, Natalie Portman, Nicole Kidman, Michelle Williams and more. With an Academy Award already under her belt, we know that Berry can hold her own in this category. In the Geoffrey Sax-directed “Frankie,” Berry plays a woman with multiple personality disorder, fighting to maintain her true identity and succumb to her racist alter-personality. “Bringing this story to the big screen has been a challenging, yet very satisfying filmmaking experience,” Berry said in a statement. “Her struggles with mental illness came at a time when the medical community and the public were still grabbling with the veracity of multiple personality disorder, and I approached this role with feelings of humility, yet great responsibility.” Sounds really deep. Fans in NYC and LA will have to wait until December to decide if they think it’s Oscar-worthy. Halle Berry-lovers elsewhere will be holding out until February 4.