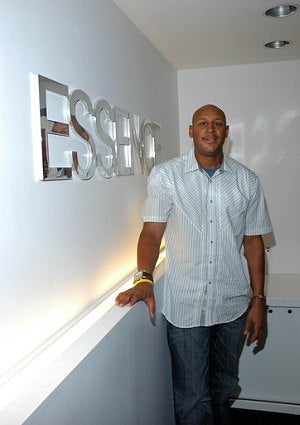 For years, gospel singer Brian Courtney Wilson was a suit and tie man, working 9-to-5 in pharmaceutical corporate sales. But he always kept his love of music alive by dabbling in songwriting. His pastor eventually introduced him to Matthew Knowles, who signed him to Music World. To date, Wilson’s debut album “Just Love” has been in the Top 15 of Billboard Gospel charts for over 50 weeks. He spoke with ESSENCE.com about following his passion and what he would like his music to stand for. ESSENCE.com: How are you feeling about your debut album being so successful? BRIAN COURTNEY WILSON: It’s been out a year now. It’s actually been on the charts for like 55 weeks, which is long because I’m a new artist; no one’s heard of me before. This is like a dream of mine, and so for people to respond and go out and tell other people — that means a lot to me. The single is number 10 on the charts this week and it’s been on the charts for 66 weeks. It’s the longest running song on the chart right now, it’s called “All I Need.”  ESSENCE.com: Speaking of dreams, you gave up pharmaceutical sales to pursue yours… WILSON: Yes, I was in corporate America for close to ten years, and I heard what I say is a call from God, and my territory ran into Matthew Knowles studio. I would leave my dentist’s office and see a big billboard of Destiny’s Child and wonder what would it take to get there and to get singing? I connected with the [Windsor Village] church and they asked me to come and be their music minister. I did that for four years and I did a song while I was there that Matthew Knowles heard and liked. It’s called “I Already Heard” and he decided to make me the first male artist on his label.  ESSENCE.com: What has the transition from corporate America into the music world been like for you? WILSON: It was very difficult; it was scary because you know when you got a steady check coming, you got a 401K plan coming every two weeks you get comfortable. That’s the bottom line and I was reluctant to let go of that stability, but I also didn’t wanna look up at 50 and say ‘Man, I wish I had done this, this and tried that.’ So, when Pastor Rudy gave me the opportunity to do music ministry at his church I jumped at it. It was tough though because I had to go explaining to my wife. She was like ‘Are you for real, what’s the retirement plan?’ There is none. But you kind of just trust God and I’m so glad that I did it because I wouldn’t be experiencing this if I hadn’t taken this risk.  ESSENCE.com: Why do you think it was important to sign with Matthew Knowles? WILSON: It was more like I try to pay attention to God’s providence and that’s why I talked about being where he was — a block away from where the label was, and then the church was another block away. So to connect all those dots together, Pastor Rudy, who I had worked with and we’re still friends, had been friends with Matthew Knowles for 25 years so he helped make that connection. I remember I was working in my yard and he called me to come in so we could meet. I talked to him for a little bit and I said to him, ‘Man, I don’t know if I can afford to dream.’ And he looked around in his office, looked at all the Grammys on the walls and everything and he said, ‘Man, the only reason I have all of this is because I dreamed.’ He understood where I was coming from because he worked for Xerox for seven years as well doing sales. I’m an artist, but you still have to count your every penny and I’m a family man, I wanna take care of my family — bottom line. When you’re a single artist you have the luxury of just taking care of yourself, but when you’re an artist with a wife and a child, you have to take care of everybody. I considered that. But, God has been faithful. ESSENCE.com: Where would you like Brian Courtney Wilson to be five to ten years from now? WILSON: I want people to see the name and associate it with the type of music that just felt good; that built community and was used in our everyday lives. Similar to when you hear ‘Happy Feelings’ by Maze.  I don’t care where you play ‘Happy Feelings,’ whether it’s at the ESSENCE Music Festival or in the church on Sunday, it means something to people. We want to make that type of music that matters not just in the church, but in the whole world.