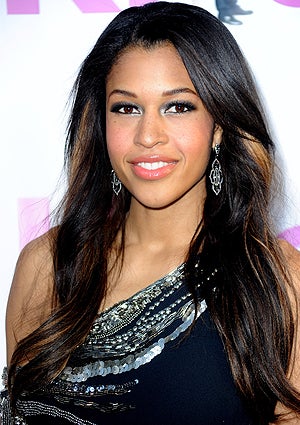 For Kali Hawk, acting is just one of many stops along her creative path. Hawk is a NewYork native, where she graduated from high school at age 12 and entered the art department at SUNY Purchase before she was even 16 years old. As a drama major, she went on to perform in projects like the Spike Lee joint, “Lovers & Haters,” and even took up the guitar for a spell in 2004. Now, Hawk is nabbing roles in big budget films like “Couples Retreat” and “Get Him to the Greek,” starring Sean “Diddy” Combs, Jonah Hill, and Brit comic Russell Brand.   Hawk spoke with ESSENCE.com just before the premiere of “Get Him to the Greek” to chat about jewelry, making it in Hollywood, and why Diddy is Mr. Manhattan.   ESSENCE.com: Are you ready for your close-up at the premiere for “Get Him to the Greek”? KALI HAWK: I am, but I’m a little tired. But, I say that with a giant smile on my face — the stuff I’m tired from isn’t brick laying, I spent yesterday hanging with Diddy and the cast promoting the film. And tonight I get to wear a necklace with a 32-karat diamond. I love it so much that I put it on the pillow next to me and totally slept with it!   ESSENCE.com: That’s some serious jewelry, what does it look like?   HAWK: It doesn’t look like an Oscars red carpet necklace. “Get Him To The Greek” is about a rockstar, so it’s very rock ‘n’ roll and almost gothic. Really, I’d rather wear it with jeans with a t-shirt, I just love it.   ESSENCE.com: Let’s talk about your first big break in the film, “Couples Retreat,” where you starred opposite Faizon Love. How’d you snag that part?   HAWK: I just auditioned. I was lucky that it was such a straight forward process where I didn’t have to know anyone. The [casting director] kept asking me back, so my experience proves that [getting a role in Hollywood] can happen in the normal way. I’d only gotten an agent four months before the audition.   ESSENCE.com: How was working with Faizon Love?   HAWK: He’s really funny, I wasn’t ready for his laugh-a-minute personality. You wouldn’t get that from “Couples Retreat” because he plays such a serious character, but he’s hilarious.   ESSENCE.com: Describe your character in “Get Him to the Greek. HAWK: I play the assistant, Chantal, to Puffy’s character, Sergio, who is the president of the record company where Jonah works. Russell Brand’s character is a loose cannon, like most rock stars, and I’m kind of a rival to Jonah because Chantal secretly wants to be an A&R executive. At a record label, everyone wants to be where someone else is, even if they’re at the right hand to the boss, like my character.   ESSENCE.com: How’d you end up in “Get Him to the Greek”? HAWK: I was thinking about different things that I’d love to do, like a Judd Apatow movie — I loved “40-Year-Old Virgin” — and then it just kind of happened. Both “Couples Retreat” and “Get Him To The Greek” are Universal films, so I got called for the part. The director was there in the audition, we improvised a bunch of things and I liked everyone in the room. Most times auditions are nerve-racking for actors but it was a great experience.   ESSENCE.com: Were you intimidated by working with Diddy? HAWK: I liked working with him, he’s Mr. Manhattan! I’ve been fortunate to work with New York icons, first Spike Lee and now Diddy, so working with him was a great experience for me. He just brought so much energy to the project, he even got the director to wear a suit to the set! I don’t know why, but one day Diddy suggested to our director, Nicholas Stoller, ‘You should dress it up on set, wear a suit’ and he did! It was really funny because Nick is a very hands-on director, so he kept running back and forth to the monitors in the suit. When I asked him what was going on, he said ‘Sean suggested I dress it up, and he’s right, I feel different.’   ESSENCE.com: What’s your favorite scene from “Get Him to the Greek”? HAWK: Any of the office scenes with Diddy, because he’s such a great improviser. This movie reminds me that Diddy’s really carved his own business, Bad Boy, out of nothing. He brought so much realness to the Sergio character and every scene, you really feel like he was speaking from experience, so it’ll be interesting to see what the director keeps from our improvisations.   ESSENCE.com: What films do you have coming up? HAWK: A drama called “Answers to Nothing” starring Dane Cook and Barbara Hershey. It’s a departure from the comedies I’ve done, my character is a writer and the film’s got a lot of heavy issues. People will be surprised by Dane’s chops because he usually plays a comedian but he’s my psychiatrist in the film so he’s very serious. My character talks a lot and he gave so much energy despite his few lines during my monologues. I’m also doing a movie with Jerry Stiller, George’s father from “Seinfeld,” in June called “Let Go.” It’s about a guy who works as a copy editor, gets bored at his job and leaves. As he finds his way, he encounters strange situations where he almost steps out on his wife. It’s ultimately about, like my dad always says, appreciating the things you had all along.
Loading the player...