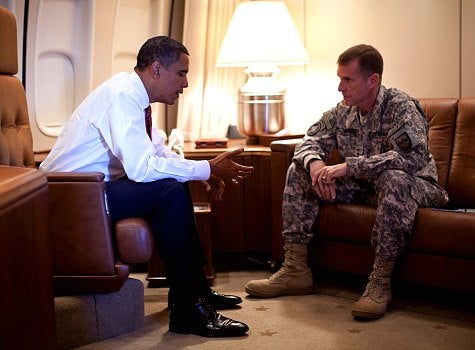 General Stanley McChrystal, President Obama’s head commander in Afghanistan is in the hot seat for a profile in “Rolling Stone” in which McChrystal expressed frustration with the Obama administration. Some of the most disparaging quotes in the story, written by Michael Hastings, reveal McChrystal’s disappointment in Obama’s interactions with top military officials. “The general first encountered Obama a week after he took office…” Hastings writes. “McChrystal thought Obama looked ‘uncomfortable and intimidated’ by the roomful of military brass…” “Obama clearly didn’t know anything about him, who he was. Here’s the guy who’s going to run his f***ing war, but he didn’t seem very engaged. The Boss [McChrystal] was pretty disappointed,” an adviser to McChrystal said. The level of disrespect McChrystal has shown the Commander in Chief and Vice President Joe Biden, whom McChrystal and an aid also spoke about, in Hastings’ profile seems unprecedented. “This is the red line in the United States military. This simply is not done. You do not make disrespectful or disparaging comments about the President of the United Sates,” CNN correspondent Barbara Starr said. The General issued an apology from his headquarters saying, “I extend my sincerest apology for this profile. It was a mistake reflecting poor judgment and should never have happened.” McChrystal was recalled to Washington D.C. following the release of the article and awaits a meeting with President Obama.

Idris Elba Talks Tapping Into His Fatherly Instincts For ...

Tevin Campbell Opens Up About His Sexuality: 'You Just Could...

These Mompreneurs Launched An Activewear Brand Aimed At Help...

‘I Can’t Wait To Marry You’: Model Shaun Ross And Acto...