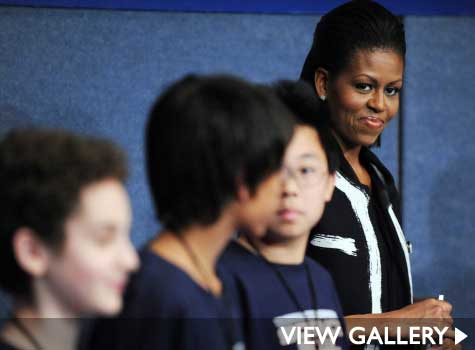 The First Lady visited the Department of Energy on Thursday and played game-show host to a math and science competition between two teams of local Maryland middle-schoolers. For the annual Science Bowl, Mrs. Obama and Energy Secretary Steven Chu took turns asking some pretty complicated questions to the children.

The Science Bowl is a competition for middle and high school students across the country. The Energy Department runs the 19-year-old program, which consists of regional competitions from 1,800 schools. Winners are flown to Washington for the national competition in April.

Obama praised the Department of Energy for climate research, nuclear security, and new energy efforts. But the reason she attended the Science Bowl was to shift focus to the children and their education in math and science. “We can’t transform our energy future unless we transform our education system.”