At her heaviest, journalist and reality star JasFly weighed nearly 300 pounds. Growing up she’d always been a bigger girl (she wore a D-cup in the 8th grade, she says) and had already been labeled fat by everyone around her. It propelled a depression that she says she’d experienced since childhood. Food had become her comfort, and punishment. “Food became so much more than what it’s supposed to be,” she says. Then, following her grandmother’s death n 2008, she decided to get up and start running around her Chicago subdivision. She’s never looked back.

The VH1 Gossip Game star spoke with ESSENCE.com about her weight-loss journey.

ESSENCE.com: You’ve lost 111 pounds in five years. What was the catalyst for your weight loss?
JasFly: My grandmother’s death was, for me, this incredibly heartbreaking gift. It was amazing to be with her when she left this Earth, but I also got to see first hand what happens to your body when you don’t take care of it. It was a turning point for me. I started to feel like I’ve got to do something because I was physically in a lot of pain. It hurt to lie on my stomach and I slept on my stomach. It hurt to sit in certain chairs and climb up the stairs. I was like, ‘Okay, but I’m 27. I can’t live like this at 27.’ So finally one day I was at home in the middle of the afternoon and I got up and said I’m going to go do something and I put on the only sneakers I had. They were these old beat up shoes and were totally inappropriate for any working out but those were all I had and I decided I’d walk my subdivision. I came back and decided I’d do it the next day and the next day and that started my transformation. 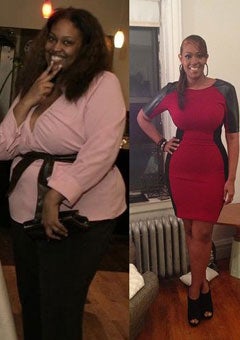 ESSENCE: How have you changed your lifestyle?
Jas: I eat completely different from what I ate in 2008. This happened over time. I’ve just found what works for me. I don’t eat red meat and pork but I don’t want people to think you cut out the red meat and pork and all of a sudden you’re skinny. No. It’s just been my choice. I also cut out fried foods and I try to monitor my carbs intake. But for me, it was really about making sure there were certain things that I had to eat every day. I had to have a vegetable with every meal. No soda whatsoever. I had to replace it with water. I only allow myself to drink certain types of things. I had to really change how I looked at food. More importantly, it wasn’t just what I was eating but how much I was eating. The biggest thing I ever could have done was go to Target and get a food scale because you really don’t know what four ounces of chicken looks like. The average chicken breast from Popeye’s is 8 to 9 ounces. Already with just the chicken breast you’re eating twice as much as you should be. So I had to reteach myself what the proper portions are.

ESSENCE: How did the weight-loss change your life overall?
Jas: I got to know who I was. At the end of 100 pounds I was standing there waiting to meet myself. I had to let go of the things that allowed me to get that heavy, and when I let go of them, I let go of the person who I wasn’t and got to see the person who I [am.] So it wasn’t just confidence, it was faith, trusting myself, allowing myself to be vulnerable to even talk about it. It was so much at the end of it. It was not about the weight and never about the food. It was about everything else that allowed me to get there that I had to let go of. So life is completely different. I move fearlessly now, whereas to allow yourself to get to 300 pounds, you’re weighed by fear.

ESSENCE: In this industry you’re going to lots of events where there’s free food and drinks. How do you maintain?
Jas: It’s ok to say no. I was recently at Kanye West’s listening session and I’m standing by the bar and this woman comes up to me and says, ‘What are you drinking?’ and I said, ‘I’m not drinking!’ She responds, ‘I represent the brand of alcohol that’s here, let me pour you our signature cocktail.’ I had to forcefully tell her I’m not drinking. So I have to learn to say no, and it’s just that simple.

ESSENCE: What do you allow yourself? Do you have cheat days?
Jas: I allow myself everything and everything that I eat. It’s just about knowing when and knowing moderation because if you deny yourself from things then you instantly crave it, and then that’s all you think about, and then eventually you’re going to crack and go nuts with it. So if I want some chocolate, I’m going to have some chocolate. I’m going to try to have a small piece of chocolate or dark chocolate instead of milk chocolate, but at the end of the day, I’ll still have that piece of chocolate.

ESSENCE: What’s your workout routine?
Jas: I have a trainer now because I want to know how to get certain muscles. I’m still running, which I really enjoy. I try to run three to four times a week and then I do floor exercises and toning exercises.

ESSENCE: What would your advice be to other women who may be in the position you were once in?
Jas: Get up. You always look at the person at the top of the mountain and think wow they’re all the way up there, but they had to start somewhere. I remind myself of that every day when I look at people who are my inspiration. Just get up even if you don’t know what to do. Just get up. You’d be amazed. I’m not magical, there’s nothing more magical about me than you or the woman reading this, so if I can do this by myself without surgery or drugs or an expensive trainer then it really can be done. You just have to get up.